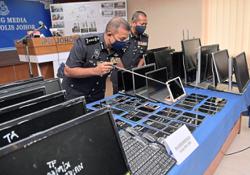 Johor police chief Comm Datuk Ayob Khan Mydin Pitchay (middle) showing some of the confiscated mobile phones during a raid to gambling premises all over the state.

"We found that 99 of them acted as caretakers of the various premises while the remaining 19 were gamblers.

He said to date, electricity supply to 46 premises has been cut by Tenaga Nasional Berhad (TNB) while four premises had their business licences revoked by the relevant local council.

He said it was important for the police to cooperate with agencies like local councils and TNB to eradicate illegal gambling.

The power supply cuts were made under Section 21A (1) of the Common Gaming Houses Act 1953 while those who were arrested are being investigated under Section 4(1)(c) of the same Act.

Comm Ayob Khan also disclosed that police conducted a total of 525 raids on online gambling activities from January until July.

“We arrested 705 people consisting of 549 premises owners or workers and 156 gamblers.

He said police had asked for power supply cuts to 224 premises from January to July, with TNB approving 74 requests.

As for revocation of operating licences, he said 224 suggestions were made to local councils in the same period with nine being approved.