The government has allocated a total of RM3.9bil for a signed contractual agreement to procure 79.9 million Covid-19 vaccine doses, the Dewan Rakyat was told.

“The government is targeting 100% immunisation of our entire adult population by this coming October.

“This is the most important target in ensuring the success of the National Recovery Plan,” he said during the ministerial briefing at the Dewan Rakyat yesterday.

He said on average, Malaysia had successfully administered a total of 400,000 doses daily.

“The boost in the vaccination rate is based on the efforts of all parties,” he added.

The minister also said he had met with the Parliament’s Public Accounts Committee (PAC) on Wednesday to provide transparency over the vaccine procurement process.

Meanwhile, the government had also approved a special allocation worth RM3.7bil to the Health Ministry as the leading institution on the aspect of public health, and as part of its spending related to Covid-19 pandemic, excluding the procurement of vaccine.

“In fact, the Federal Government had channelled a special allocation to all states worth an estimated RM260mil,” he noted.

He also expressed his appreciation to all the frontliners who continue to ensure that the public healthcare system is not paralysed during this critical period.

“Under the Permai package, a total of RM150mil was allocated to add more than 3,500 medical staff to the Health Ministry.

“The government had also agreed to allocate a total of RM1.2bil to extend the services of more than 14,000 medical officers and nurses who are under existing contracts

“Aside from that, a total of 500 health officers who have undergone mandatory retirement had been re-appointed,” he said.

He added that the due to the government’s concern, the special allowance for healthcare workers at the vaccination centres was adjusted to RM600.

“In total, the government had allocated a total of RM300mil for this purpose,” he said. 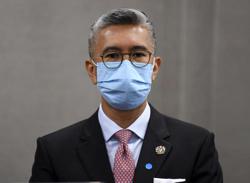