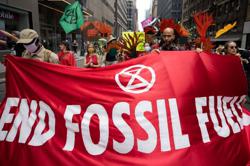 GEORGE TOWN: A century-old heritage building here has been vandalised by unknown parties with oil-based paint.

The walls and main door of the Chung Shan Wooi Koon Association, which is a Category One heritage building in King Street here, were found defaced yesterday.

“Someone vandalised the walls and the main door of the building with oil-based paint.

“The doors of the building were made from ancient wood, and we have to clean it carefully and not use chemicals that might be too aggressive as it will damage the wood.

“The restoration works easily cost at least RM50,000. I urge hardware shops nearby to help look out for the culprits and help us by questioning customers who are suspicious,” she said.

Ang said the building was classified as a Category One heritage building within the George Town Unesco World Heritage Site.

“Under Category One, the building needs to be conserved as original.

“Category One is for buildings of high architectural and historical values which are not to be demolished, altered and extended except for restoration.

“Any adaptation for the use must have minimal impact on the cultural significance,” she said.

The association was established in the early 1800s by clansmen from the Heong San district in China’s Guangdong province. The present building was believed to have been completed in the mid-19th century.

“Someone threw urine and faeces at the building on June 30, and a police report was made. The same thing happened again on July 28,” he said.