PETALING JAYA: All Umno MPs must push for the Emergency and related ordinances to be debated in the House and withdrawn, says Datuk Seri Dr Ahmad Zahid Hamidi ahead of the highly-anticipated special Parliament sittings for five days from July 26.

"Umno MPs must express the party's intention to propose for Parliament to debate and withdraw the Emergency proclamation and its ordinances," said the Umno president in a statement on Sunday evening (July 25), adding that members must also vote similarly.

Ahmad Zahid said this decision was made by Umno after taking into account the views of Malaysians who rejected the Emergency, adding that it has caused economic stagnation and neglected the welfare of Malaysians.

He added that Malaysians also rejected excessive fines being imposed.

"The Emergency failed to address the Covid-19 pandemic and instead, it is a political tool to emasculate the system of Parliamentary democracy," claimed the Bagan Datuk MP.

Citing Article 150(3) of the Federal Constitution, Ahmad Zahid said the Emergency and its ordinances must be debated and its legitimacy will be determined when it is passed or withdrawn in the House.

Ahmad Zahid cited Article 150(7) of the Federal Constitution, which stated that the Emergency ordinances would be enforced for another six months if it was not withdrawn.

He said this would contravene the decision made by the Umno supreme council in Oct 29, 2020, and in April 25, June 16 and most recently on July 7 this year.

He also said they should uphold and abide by the Yang di-Pertuan Agong's and Malay Rulers' views that there is no need for the Emergency to be continued and all Emergency ordinances to be debated in Parliament, which is in line with provisions under Article 150(3) of the Federal Constitution.

Ahmad Zahid also reminded Umno MPs of the party's stance in a meeting on April 25.

"If the Emergency is extended beyond Aug 1, then MPs will withdraw their support; ministers and deputy ministers, as well as GLC chairmen from Umno will resign," he added.

Three Emergency proclamations and nine ordinances will be tabled during the special sittings.

According to the latest Order Paper released by Parliament, MPs will be allowed to ask questions and voice their views during the special sittings that will consist of briefing sessions from five ministries battling Covid-19.

The Dewan Rakyat is scheduled to sit from July 26-29 and on Aug 2, while the Dewan Negara will sit from Aug 3-5. 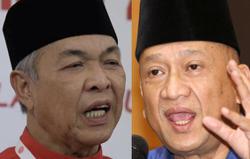