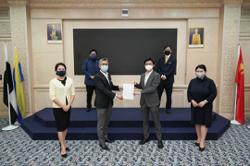 Bridging plan: Tengku Zafrul Abdul Aziz receiving the ‘Marshall Plan’ from Chong as other MCA leaders look on after the meeting.

“In working towards an inclusive economy based on the principles of shared prosperity, recovery efforts should be calibrated to those who need it most,” said the party in a statement after the meeting, where the MCA delegation managed to have a meaningful conversation with the Finance Minister and his team on topics pertaining to national recovery strategies.

“The proposal revolves around the theme of ‘bridging gaps and divides to ensure no Malaysian gets left behind’, and advances the need of a Malaysian ‘Marshall Plan’ approach which emphasises allocation on a per capita basis.

“For short-term economic relief, MCA proposed six key thrusts to resolve the more pressing issues, including reviewing PenjanaKerjaya for the service sector, reorientation of the Wage Subsidy Programme, the establishment of clear and consistent SOPs for Covid-19, the tabling of recovery plans that are specific to the respective ministries, the creation of targeted lockdowns and the provision of micro loans to ensure the survival of small-to-medium enterprises,” said the party.

MCA is of the opinion that for the medium-term, the plan for economic recovery should move towards attracting foreign investments and revitalising the tourism sector in order to boost the national GDP.

In the long run, MCA argues there is a need for Malaysia to implement a Marshall Plan-type development aid for the states, which allocates according to the respective state’s economy and proportion of hardcore poverty.

Also known as the European Recovery Programme, the Marshall Plan was a US initiative to provide aid to western Europe following the devastation of the Second World War.

In this, the party is proposing a RM3bil special allocation for Covid-19 recovery assistance for each state, save for Sabah and Sarawak, which should get RM5bil each.

“Additionally, MCA proposes the government to stipulate a tax system that is pro-business and pro-consumer by lowering the personal income tax rate as well as for SMEs with paid-up capital of less than RM5mil, by one per cent,” read the statement.

Other than tax reductions, MCA added that long-term economic recovery will also be aided by assistance for the digital economy to take off, along with a new national shipping line to equalise the cost of goods in Sabah and Sarawak (with the peninsula), the reintroduction of 1Malaysia-type retail stores to ensure fair pricing of daily necessities, the establishment of travel bubbles with friendly Asean+3 and Oceania countries, as well as incentives to hire Malaysians.

MCA’s proposal for the short term includes temporary income support via the Employment Insurance System, RM6,000 in additional income allowance for single parents who lost their jobs, equitable distribution of aid under Bantuan Bakul Makanan (Food Basket) programme, the provision of shelter for the distressed and homeless, along with the expansion of the Employment Insurance Scheme, and the adoption of a spatial-demographic method of classification of household income for the urban poor to assist aid distribution.