Registering the unregistered: How Malaysia plans to vaccinate 'invisible' communities 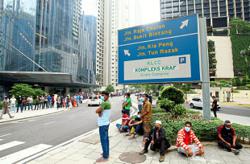 KUALA LUMPUR (Bernama): Laden with an ice box, needles, personal protective equipment and other items, the team of volunteers and medical officers stepped out of their van on a narrow kampung road in Beranang, Selangor, one hot Tuesday morning recently.

"At least the rain has stopped," mused a volunteer as the six-person group made their way uphill on a dirt road.

It was uncomfortably humid and the equipment they carried was heavy but that trip on July 6 was necessary to protect bedridden and disabled people – those who are unable to go to Covid-19 vaccination centres (PPV).

It was the first day of the door-to-door Covid-19 vaccination programme by medical non-governmental organisations (NGOs) such as Mercy Malaysia, Islamic Medical Association of Malaysia Response & Relief Team and the National Cancer Society, aided by the Social Welfare Department (JKM) and the Health Ministry.

The success of the programme means expansion to other hard-to-reach communities, such as those in the interior, the Orang Asli, the stateless and refugees.

"Today is very important to us because we would like to know the flow of the work and what the challenges are so we can work it out," said Dr Mohammad Iqbal Omar, head of Mercy Malaysia's health unit.

Their first stop was at Kampung Kuala Pajam and the first home to receive this service was that of an elderly man recovering from a stroke, and four family members.

Once at the house, Dr Mohammad Iqbal gave the family a briefing on the Covid-19 vaccine, Pfizer-BioNTech in this instance, and possible complications before asking for their medical history and consent to be vaccinated.

He and the medical assistant then reconstituted the vaccine. The vaccine has a shelf life of two hours at room temperature, and they had no time to waste. After giving the family their shots, the team updated their vaccine status on the JKM database and monitored the recipients for 15 minutes for any adverse reaction.

Then, they made their way to the next house, about five kilometres away.

The houses in Beranang and Semenyih are set far apart and the common mode of transport is the motorcycle. There are few vans and cars on the narrow road and should a motorist encounter another vehicle, it takes careful manoeuvring in order not to brush against it.

The team expects to repeat the vaccination process for 22,000 homebound people as well as their caregivers in Selangor and Kuala Lumpur. Dr Mohammad Iqbal said inoculations would continue until everyone is covered.

Expansion of the programme means the situation will get more challenging rather than easier.

Despite a slow start to Malaysia's National Covid-19 Immunisation Programme, mass vaccination efforts have increased in the past few weeks, surpassing the daily 400,000 dose target as of July 12. Covid-19 cases, however, have also been breaking records with 13,215 daily cases reported on July 15.

With the advent of more transmissible variants and uneven application of health restrictions, the government and public health experts have pinned their hopes on vaccines to return the country to some semblance of normalcy.

Malaysia plans to vaccinate at least 80% of adults, including non-citizens, in order to return to a semblance of normal.

For now, the door-to-door programme is for Malaysian citizens registered with JKM, and not necessarily with MySejahtera.

The organisers hope to expand the programme to other underserved communities and generate their own database, which would be linked to the programme and will include those who are unable to register for vaccines due to technological, geographical or bureaucratic barriers. As the door-to-door programme also includes vaccination for all adults within the household, the organisers hope it will help those who would not come forward for a shot under normal circumstances.

Experts agree reducing red tape would help increase coverage, but some form of registration should still occur to facilitate vaccine distribution, keep track of adverse events and follow up on the doses.

"In an ideal world, we can allow people to register on the spot and vaccinate without being too thorough with the documentation," said Datuk Dr Ahmad Faizal Mohd Perdaus, president of Mercy Malaysia.

Particularly challenging would be those who are unable to register for vaccines due to citizenship issues. This group includes the stateless, refugees and irregular migrants.

Although Malaysia is no stranger to vaccinating these communities, such as during last year's wild polio outbreak in Sabah, mass vaccinating them against Covid-19 is a brand new challenge.

Dr Ahmad Faizal said Covid-19 vaccinations could not rely on the framework of previous vaccination drives as the situations are not comparable.

"Covid-19 is a first for vaccines as the priority for vaccination is the elderly, not children," he said.

Government agencies and NGOs are currently reaching out to people in the interior, Orang Asli villages and rural areas to create awareness and register them for the vaccine. Mobile vaccination sites have also been deployed to these areas to administer the shots.

However, this setup has not been without issues. Some have refused to sign up during registration drives. Several signed up but did not show up for their vaccine, while others were turned away for not having an identification card.

Datuk Isa Ab Hamid, the senator representing Orang Asli affairs in the Dewan Negara, said one way to fix the issues is to empower village and community leaders with registering and vouching for their charges who may not possess proper documentation.

"We can ask the village chief to verify the person because he knows who is Orang Asli and who isn't, and who the parents are," he said.

"We don't want anyone to fall between the cracks and become the cause for the virus to spread among the Orang Asli community," he added.

He said those without proper identification would not go to vaccination sites due to fear and shame. As such, he hoped the home visit programme would be able to service them, adding that it should happen sooner rather than later to protect everyone.

Other than community leaders, another way to register the underserved communities is by collecting and using other identification information of theirs, according to Wong Chun Ting, national project officer for Public Health and Migration at the International Organisation for Migration (IOM).

"For the undocumented population, what we can do is collect the minimum information like age, phone number, gender and sex. There are also Malaysians who don't have phone numbers and documentation as well so the way we do it is to generate a different unique number for registration purposes," he said.

According to the United Nations High Commission for Refugees (UNHCR) and local NGO Development of Human Resources in Rural Areas, Malaysia has one of the highest numbers of stateless people in the region. At last count, there were 12,400 stateless people in Peninsular Malaysia alone. There is no estimate for the stateless in Sabah and Sarawak.

As for irregular migrants, IOM puts the figure at between one and three million people in Malaysia while over 170,000 refugees are registered with UNHCR.

Dr Ahmad Faizal stressed the importance of vaccinating everyone regardless of citizenship status.

"In the time of the pandemic, it is more or less an issue of human rights now. You have to accord them the same treatment, you have to do the same testing, you have to vaccinate everyone," he said.

"We cannot ignore the non-citizen population. We do so to our detriment." – Bernama