GEORGE TOWN: A Datuk is expected to be charged with corruption involving RM16mil at a Sessions Court in Butterworth.

It is believed that the man, a board of directors’ chairman for a real estate company, was arrested by the Malaysian Anti-Corruption Commission for allegedly accepting bribes and valuables estimated at more than RM16mil.

According to sources, he had allegedly accepted bribes from a director of a developer company in return for appointing the developer’s company for a joint venture project carried out on a cooperative-owned land for development purposes.

He is also expected to be charged at a Kuala Lumpur Sessions Court on Thursday. 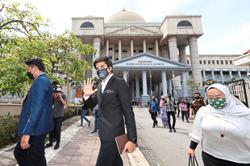