He congratulated both leaders and wished them all the best in their new posts following the announcement made by the Prime Minister’s Office.

“Both leaders have their own extensive expertise and huge experience in their respective fields that will benefit the people and the country, especially when facing difficult times due to the Covid-19 pandemic,” Dr Wee said in a statement yesterday.

The Transport Minister, who is also MCA president, added that his ministry would continue to collaborate closely with Ismail Sabri and Hishammuddin in efforts to bring Malaysia out of the difficult situation in the interest of the rakyat.

“We believe it will further consolidate and strengthen the administration of the Federal Government.

“Both Ismail Sabri and Hishamuddin are experienced Cabinet Ministers.

“With their appointments, our party believes that they will make more significant contributions to the nation and the rakyat,” Chong said.

“MCA will work closely with both leaders and all Cabinet Ministers with continued focus on defeating the pandemic, revitalising the economy and aiding the rakyat during these difficult times,” he added. 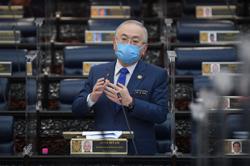