Five states transitioning to phase two of NRP on July 5

Senior Minister (Security) Datuk Seri Ismail Sabri Yaakob (pic) and Finance Minister Tengku Datuk Seri Zafrul Abdul Aziz said that these five states were being rewarded for having lowered their number of cases, having better control of the beds in ICU wards and having increased the percentage of the population vaccinated in accordance to set thresholds under the NRP.

Ismail Sabri and Tengku Zafrul announced this on Saturday (July 3) in a joint media conference at the Prime Minister's Office.

"Although there has been an increase in cases, most states (based on data of the indicators) have shown a drop in cases. State-wise, many have fulfilled the indicators and this (transitioning phases) is a better outline.

"This is a reward for those states who have met the threshold and gives incentives to other states to do better," said Tengku Zafrul. In order to transition to the next phase, states need to reach the minimum thresholds for all three indicators - Click on image to enlarge

Ismail Sabri, who is also Defence Minister, said that the states moving to Phase Two will see more businesses allowed to open.

"Inter-district and interstate movement are still not allowed, except for teachers and students who are involved in important examinations.

"Long-distance couples can cross borders for emergencies and with written police permission.

"Morning and farmers' markets are allowed for certain essential commodities such as seafood, vegetables, fruits, meat and groceries with strict SOPs but weekend markets and pasar tamu are still not allowed.

"Worker capacity for essential industries will be increased to 80%.

"Sports and recreation for individuals and non-contact sports for health purposes – such as jogging, exercising, tai chi, skateboarding, archery, equestrian, golf and motoring – which can be done with physical distancing will be allowed," said Ismail Sabri.

He said more details of what activities are allowed and not allowed is accessible on the NSC website.

On June 15, Prime Minister Tan Sri Muhyiddin Yassin announced the four-phase NRP – with Phase One being the most restrictive.

Transitions between phases are governed by three threshold indicators – the number of daily cases, the number of beds used in intensive care units and the percentage of the population fully vaccinated.

To enable the transition to Phase Two, the average daily cases of Covid-19 nationwide should drop below 4,000, the public health system should be out of the critical stage, including the rate of bed use in intensive care units returning to moderate levels, and 10% of the population to be fully vaccinated.

About 40% of the population should have received two doses of the vaccine before the recovery plan moves into the new phase.

The transition to the fourth and final phase of the plan could happen when the number of new cases drops to below 500 and the healthcare system at a safe level with enough beds in ICUs.

Additionally, 60% of the population should be fully vaccinated.

However, Tengku Zafrul explained that the threshold indicators are now calculated against the population of the states.

For example, in order to meet the first threshold of the number of daily cases to transition from Phase One to Phase Two of the NRP, a state needs to be below 4,000 cases multiplied by its population and divided by the country's population. 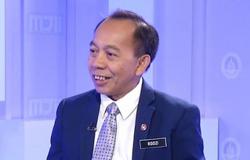