Court to hear submissions in Zahid graft trial on Aug 5

The hearing has been fixed for six days on Aug 5, 6, 9, 11, 13 and 24. Deputy public prosecutor Datuk Raja Rozela Raja Toran confirmed the matter when contacted.

“The oral submissions at the end of the prosecution’s case will be conducted in open court, ” she said.

The court had previously fixed June 28 to 30 and July 1 and 2 to hear submissions.

The prosecution closed its case in the trial on March 19 after calling 99 witnesses to testify.

On Oct 19 and Dec 14, 2018, and Feb 20, 2019, Ahmad Zahid claimed trial at the Sessions Court here to a total of 47 charges, 12 of which are for criminal breach of trust (CBT), eight for bribery and 27 for money laundering involving millions of ringgit belonging to Yayasan Akalbudi.

For the 12 CBT charges, Ahmad Zahid is accused of having used the funds to make payments for personal credit cards, insurance policies and personal vehicle licences, remittances to a law firm and contributions to the Royal Malaysia Police football association.

He is alleged to have committed the offences at the Affin Bank Bhd branch in Jalan Bunus off Jalan Masjid India here between Jan 13, 2014, and Dec 23, 2016.

The 68-year-old Bagan Datuk MP is also charged with eight counts of receiving bribes from three companies as an inducement for him, in his capacity as the then home minister, to help the companies obtain MyEG projects, for the supply of passport chips and to be appointed the operator of migrant visa one-stop centres in Pakistan and Nepal, respectively.

He also faces 27 money laundering charges by engaging in direct transactions involving proceeds from illegal activities between March 29, 2016, and April 11, 2018. 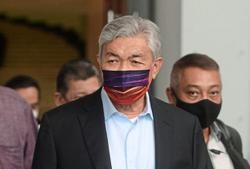