Umno polls can still take place in September, but may be derailed by ‘certain factions’, says Annuar 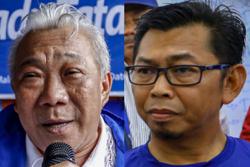 In a Facebook post on Friday (June 25), Annuar said the party polls and meeting of delegates should go ahead as planned in September, but alluded that it could still be derailed by “certain factions with differing beliefs in the party”.

"God-willing in September, the divisional delegates meeting and the election on all positions in the party will be held in line with the provisions within the Umno constitution.

"Unless there are other 'nawaitu' (intentions) and other beliefs," said Annuar briefly.

When contacted earlier, Annuar said he doesn't know if the Umno elections will be postponed.

"I don't know. It's up to the Registrar of Societies," he said.

"We have to wait for an announcement from the supreme council," he said.

Earlier, party sources said that the Umno polls were expected to be postponed for eight months.

The party source also said the decision to postpone polls was made via a resolution that was made online recently, as the Umno supreme council was not able to meet due to the lockdown.

The party source said while the decision to postpone Umno polls has been made in an online resolution, it will be made official in the next supreme council meeting.

"Until the meeting is called, then the decision (to postpone party polls) can be properly stamped," the source said.

Umno, which has 3.35 million members as of March 26, was due to call party elections last year but this was postponed due to the Covid-19 pandemic, which saw spikes at the end of 2020 following the Sabah state elections.

According to Umno's constitution, the supreme council has the prerogative to postpone party polls up to 18 months from the date when the elections are supposed to be held.

Umno elections are held every three years, with the last one held on June 30, 2018. The current term for Umno's office bearers is set to expire on June 30.