S’gor all out to jab factory workers 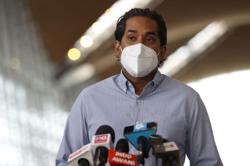 KLANG: Selangor, the state with the most number of infections and deaths, will embark on a massive vaccination exercise on Monday targeting workers, especially those from the manufacturing sector.

The Selangor Covid-19 Vaccination Programme (SCVP) is being touted as the answer to returning the state to some sort of normalcy.

The nation’s most industrialised state, which is highly dependent on manufacturing and other industries, has been crippled by the succession of movement control orders since last March.

“This will substantially reduce the risk of workers getting infected and it would be less restrictive for production operations to return to capacity.

“Factories can also return to their previous capacities as soon as a substantial number of their employees have been vaccinated,’’ he said.

According to Teng, the state was still in the process of coming up with an exit plan which would determine the number of workers to be vaccinated in every company.

“In order to know how many people should be vaccinated in a single establishment, we have to first find out how fast the vaccination process can be carried out,’’ said Teng.

Malay Businessmen and Industrialists Association of Malaysia (Perdasama) president Mejar (R) Datuk Abdul Rahim Saad applauded the move and said the nation’s economy urgently needed to get back on its feet.

“Many manufacturers have signed contracts to manufacture and deliver products but cannot fulfil orders because they cannot run at full capacity yet due to the restrictions imposed,’’ said Abdul Rahim.

Besides enabling companies and industries to go back to their usual schedules and capacities, the SCVP would also bring back investor confidence, he added.

The SCVP initiative, set to complement the Federal Government’s national immunisation programme, will kickstart at various locations that will function as PPV, and registration is open to all companies, not only in Selangor, but throughout Malaysia.

It is believed that employers will be charged about RM350 for two doses of the Sinovac vaccine administered to each worker.

Registration is expected to be opened to individuals at a later date and it is believed that vulnerable groups such as senior citizens and youngsters, as well as members of the B40, will be given priority.

A state government source said these individuals will be vaccinated for free.

It is yet to be known if others who do not belong to vulnerable groups or the B40 category can also register to get vaccinated, and if they will need to pay if allowed.

The PPV will be managed by Selcare, which is the administrator of the state government’s healthcare programme Skim Peduli Sihat.

Other than the PPV, vaccinations will also be available at community halls in Batu Caves, Ampang, Kajang, Cyberjaya, Banting and Bestari Jaya.

Selcare clinics in Subang Jaya, Klang, Puchong, Shah Alam, Petaling Jaya and at the Skypark in Subang will also be used to administer vaccines.

“We have to give focus to the industrial sector as it is found to be one of the main contributors towards the spread of the disease.

“Secondly, as an industrialised state, we have to protect our businesses from collapsing as when these industries fail, employers will incur losses and workers will also probably be out of jobs.’’