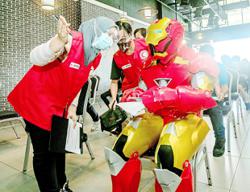 KUCHING: Even “superheroes” like “Spider-Man” need to get vaccinated against Covid-19 it seems.

Mohd Syah Nizam Rajap, 32, turned up in a Spider-Man costume at the Kozi Square vaccination centre here on Friday (June 25) for his first dose of the vaccine.

Photos and a video of the “superhero” getting the jab have since been circulating on social media.

Mohd Syah, who works at Tabung Baitulmal, said he had planned to dress up in the costume even before he got his appointment for the vaccination.

"I wanted to help those who are afraid of getting the vaccine. If they see that a superhero wants the vaccine, they shouldn't be worried about it," he said when contacted.

At the same time, he wanted to lighten the atmosphere and entertain the medical staff and volunteers at the vaccination centre.

"They have been working hard to give the jabs, so I wanted to do something different and make it fun for them," he said.

He ended up having photos taken with the staff and volunteers, from the moment he arrived until the jab was given.

"After that some of them still wanted to take photos with me. I am glad to be able to make everyone happy," he said, adding that he planned to put on an Ironman costume for his second dose appointment in about three weeks' time.