KUCHING: A man who robbed a cake shop with a toy pistol in Kota Samarahan has been arrested.

According to Borneo Post, Kota Samarahan OCPD Deputy Supt Sudirman Kram said the 24-year-old from Sibu was nabbed at a motel in Jalan Padungan here around 5.20pm on Wednesday (June 23).

“According to the cake shop’s worker, the man entered the premises at Medan Universiti around 4.40pm on June 20 and bought a drink.

“As soon as the worker opened the cash register, the suspect pointed a gun at the worker and demanded the money inside. After obtaining the money, he fled the scene on his motorcycle,” he said on Thursday (June 24).

The portal reported that the suspect told police following his arrest that he was under the influence of drugs at the time of the incident.

“He said he bought the toy pistol the day before the robbery at a shop in Kuching,” Supt Sudirman said.

A background check revealed the suspect had records for housebreaking and theft, and had previously been detained under the Prevention of Crime Act 1959 which ended on April 17 this year.

During his arrest, police seized a motorcycle, helmet, shoes, jeans and a long-sleeve T-shirt believed to have been worn by the suspect during the commission of the crime.

Supt Sudirman said police will be applying for a remand order on the suspect to facilitate further investigation under Section 395 of the Penal Code. 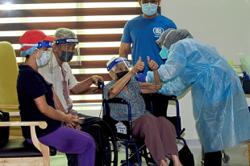