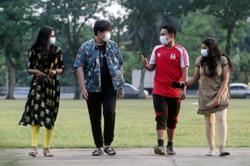 PETALING JAYA: Before 2016, a boat could not travel for more than 500m along the Klang River before it got stalled, its motor stuck with plastic and other floating waste.

“Today, we can travel the entire length from Pangkalan Batu to Port Klang without stopping. This is a great indicator that most of the waste is being caught by our seven log booms and the Interceptor, ” said Landasan Lumayan Sdn Bhd managing director Syaiful Azmen Nordin.

This would allow river taxi services to be deployed soon, he said, adding that river waste collected monthly from the Klang river had been successfully reduced by 40% since cleanup efforts started in 2016. 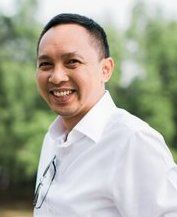 The Interceptor is a 100% solar powered machine, capable of extracting plastic autonomously along the surface of the river as it glides along the river.

However, according to a new study, more than 1, 000 rivers are accountable for 80% of plastic waste found in the ocean, with the Klang river listed as among the top contributors.

The environmental research released on April 30 on Science Advances estimated that more than 1, 000 rivers account for 80% of global annual emissions in plastic, ranging between 0.8 million and 2.7 million metric tonnes per year.

The study, which also found that small urban rivers are among those which are most polluting, put Klang River as the second highest riverine emitter of plastic into the ocean at 1.33%, tied with India's Uthas river and the Philippines' Tullahan river.

The Philippines has the most number of rivers emitting plastic waste into the ocean, with the Pasig river contributing the most plastic waste at 6.43%.

The study uses geographically distributed data on plastic waste, land use, wind, precipitation, and rivers to calculate the probability of plastic waste of reaching a river and subsequently, into the ocean.

"This probabilistic approach highlights regions that are likely to emit plastic into the ocean.

"We calibrated our model using recent field observations and show that emissions are distributed over more rivers than previously thought by up to two orders of magnitude," it said.

"These high-resolution data allow for the focused development of mitigation strategies and technologies to reduce riverine plastic emissions," it said.

The study noted that past research, which found 10 rivers contributing most of the plastic waste in the oceans, had relied on empirical indicators representative of waste generation inside a river basin.

However, this method did not account for the spatial distribution of plastic waste generation or climatological or geographical differences within river basins.

“While these modeling efforts have provided a first approximation of the magnitude and spatial distribution of the global riverine plastic emissions, they emphasized the scarcity of data on macroplastics contamination in the freshwater ecosystems," it explained.

Syaiful said from 2016 to 2020, the Selangor Maritime Gateway extracted over 67, 000 metric tonnes of floating waste from the Klang river, including plastic, via trapping the floating waste into seven log booms constructed along its 56km length.

Landasan Lumayan Sdn Bhd, a corporation mandated by the Selangor state government, is tasked to clean and rejuvenate 56km of the Klang River - from the middle of Midvalley to the river mouth at Port Klang.

Syaiful said in 2018, the Selangor government had ramped up works with the setting up of the Selangor Martime Gateway to bring together various state agencies under one roof and reduce the total waste volume at the Klang river by 30% by 2022 and 40% from 2023 onwards.

Since then, Selangor Martime Gateway's average monthly extraction of river waste has reduced to 900 metric tonnes from 1, 500 metric tonne previously, he said.

"The Klang River has been identified as a major contributor of waste and that is why the state government decided to focus its efforts here. As of today, we are already at 27%," he said.

Syaiful said in 2019, Selangor Martime Gateway partnered with a Dutch non-profit organization, The Ocean Cleanup, to place their Interceptor on the Klang River as part of its river waste management system. 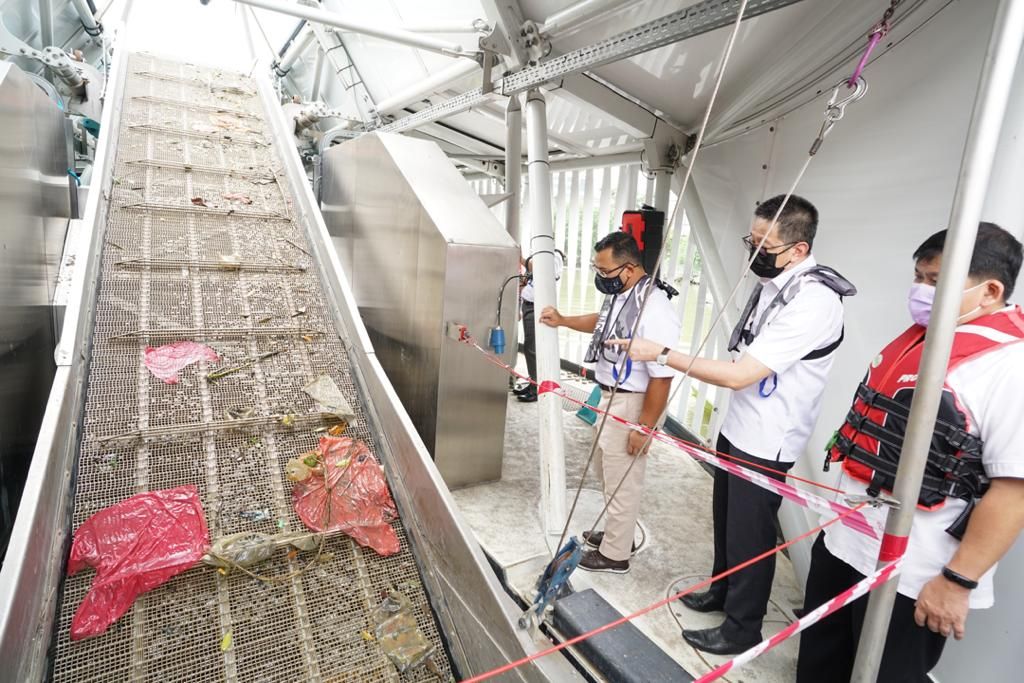 In March this year, British band Coldplay said it would sponsor the second Interceptor, which would also be deployed on the Klang River soon.

The Ocean Cleanup's Interceptor has also been used in other heavily-polluted waterways in countries around the world, including Indonesia, the Dominican Republic, Vietnam, United States, Jamaica and Thailand.

"The total amount extracted monthly from the seven log booms, together with the Interceptor is currently about 900 metric tonnes a month," he said.

Syaiful said the visible reduction in single-use plastic bags is a testimony to the Selangor state government’s efforts and commitment in stamping out the use of single-use plastics, as well as the outcome of the state's "no straw campaign".

"However, we believe that the extraction volume is starting to plateau and at some point soon, this will not reduce further, unless there is a drastic shift in attitude among people and industries that are mindful about river protection.

"If we can successfully clean Klang River and create a new economic value, then it can be a model for other rivers in the country," he said, adding that Klang River is only part of the problem as there are many other polluted rivers found in the country.

When contacted on Klang River being one of the top contributers to plastic waste, the Department of Irrigation and Drainage said there is lack of data to show actual reductions or changes in terms of plastic waste being discarded into rivers in the country.

"Therefore, there is no data on actual tonnage of plastics that have found its way into the river.

"Solid waste traps such as these are installed and maintained by the Department of Irrigation and Drainage, local authorities, government-owned companies such as Landasan Lumayan Sdn. Bhd or other entities appointed by state governments.

Where do the waste come from and what are the challenges to keep the river clean?

Syaiful said most plastics found in the Klang River are domestic waste, which are from urban areas where people do not dispose their trash responsibly into bins.

"During rain, these items are washed into drains that flow into our rivers, ” he said.

Because the last stretch of the Klang River connects to the Straits of Melaka and it is located at the country's busiest maritime, Port Klang, Syaiful said there is also plastics flowing in from the ocean into the river.

"The full length of Klang River is 122km and intersects with seven municipalities over two states and as such, there are many jurisdiction challenges in the overseeing of end-to-end river management.

"Selangor Martime Gateway has managed to tighten this loop for the last 56km of Klang River where we have seen huge improvements to stopping the leakage of waste, including plastics from entering the ocean," he said.

He said there needs to be a major mindset shift among the people and industries, as well as stricter enforcement action by authorities and continuous official reminders to stop waste from entering the country's waterways.

"People are generally complacent until the water to their taps is cut off, then they blame the authorities.

"People and businesses need to start realising that they are the biggest contributors to our ongoing river pollution issues, and yet 90% of our water consumption comes from rivers," he said.

"Currently, all the waste retrieved from the river (like municipality waste) is sent to landfills, without attempts to recover its value.

"One of Landasan Lumayan’s mandate is to turn what we now register as waste into resources with commercial value," he said.

In a reply to The Star, the Environment and Water Ministry, as the anchor ministry for marine environment and biodiversity, said along with seven south-east Asia countries, Malaysia is currently implementing a project titled “Reducing Marine Litter by Addressing the Management of the Plastic Value Chain in South East Asia (SEA Circular)”

"The aim of this project is to come out with a policy that will guide the management of marine litter, including plastic waste that will be reflected in the upcoming National Marine Litter Policy," it said.

The ministry said the project will be a broad-based implementation plan on addressing marine litter challenges such as plastic pollution and other marine litter, guided by a multi-stakeholder approach.

The ministry revealed that it is also in the final phase of finalising a circular economy roadmap which aims to reduce plastic waste at source as well as putting a value to plastic as an element that can be recycled to other uses.

"In 2019, it was reported that only 24% out of 1.4 million tonnes disposed plastic waste were recycled as secondary material and 63% were either left at sanitary landfill, illegal dumping site, burned while the rest were leaked to the environment.

"Only 3% were utilized for energy generation due to lack of facility and appropriate technology," it said.

The ministry noted that the Circular economy solutions for plastics, include, among others, producing plastics from alternative non-fossil fuel feedstock; using plastic wastes as a resource; redesigning plastic manufacturing processes and products to enhance longevity, and collaboration between businesses and consumers to encourage recycling and increase the value of plastic products.

"Circular economy can also boost local communities and local jobs, both through its potential to create new markets and products and its emphasis on creating local material loops and shortening supply chains," it said.

The ministry said it recognises the threat of marine waste, especially plastic pollutants, to marine ecosystems, food security and the sustainable livelihood of local community.

The ministry said numerous efforts are continuously implemented to address the issue and in sustaining the vast marine biodiversity of Malaysian waters, including launching a "Zero Single Use Plastics Roadmap" in 2018 that serves as a holistic policy direction in addressing single-use plastic pollution in Malaysia.

The roadmap is aimed at addressing the severity of plastic pollution in the country, low plastic waste recycling rates, the absence of a uniform policy framework, as well as an environmentally friendly and cost-effective alternative, and to prevent illegal plastic waste from entering the country.