‘Everyone must do their part’ 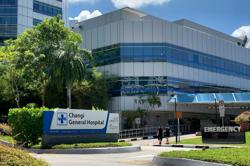 PETALING JAYA: The nation’s Covid-19 infectivity rate will keep rising due to increasing active clusters and sporadic cases in the community unless people are vaccinated quickly and widely, say health experts.Universiti Putra Malaysia medical epidemiologist Assoc Prof Dr Malina Osman said the rise in the infectivity rate, or the R-naught (R0) value, was expected as there were about 850 active clusters nationwide as of Monday.

She said active clusters had been increasing since April 4, when 359 were recorded. On May 5, the number of active clusters rose to 411 and on June 6, it climbed to 713.

“Even though we hope cases can be reduced through contact tracing and screening, some cases from ongoing clusters may have been left unchecked or escaped the screening. This subsequently introduces the infection to other settings.

“That is why a self-lockdown and adherence to the standard operating procedure (SOP) are very important to curb the spread,” she said when contacted yesterday.

To bring down the R0, Dr Malina said cooperation from the community was vital.

“Suppression of the infection is no longer on the government’s shoulders alone. It has to be done fully by the community.

“We hope that by next week, the number of fully vaccinated persons in the community can reach up to 10% (of the population) and that people will adhere to the SOP.

“Without these measures, the R0 projection may be increased,” she said, adding that this would contribute to more Covid-19 cases.

“Those who have been vaccinated need to continue adhering to the SOP. As for those who are entitled

Dr Malina suggested that the government allow the elderly and people with disabilities to get their vaccine via walk-ins and for those in the economic sectors to be vaccinated together with their families.

The R0 of a virus is a measure of its transmission or number of new infections generated by each case.

For example, an R0 rate of 1.0 means that on average, each infected person will infect one other person they come into contact with.

“The projected average R0 next week may increase to more than 1.0 unless we can curtail sporadic cases through increased screening, detection and isolation while maintaining a high inoculation rate in red zones in these states,” she said.

She added that the movement of people was also a contributing factor, as evidenced by the high number of private sector employees who were allowed to go to their workplace despite the lockdown.

She said the inability to tackle the high number of sporadic cases in the community had also fuelled the R0, adding that those cases were usually asymptomatic and could contribute to the high number of daily “brought in dead” cases nationwide.“Since many people have not been vaccinated or screened for Covid-19, they could be moving around and spreading the virus,” she said.She advised people from hard-hit areas where sporadic cases had been reported to go for screening.She added that the fee for Covid-19 tests should also be kept low to enable people to access the service.

International Islamic University Malaysia epidemiologist Prof Dr Jamalludin Ab Rahman had also observed the R0 increase early on.“Since the R0 values are compared to the previous values, the day when we observe a significant dip may cause the subsequent daily R0 to be higher,” he said.

Prof Jamalludin said the rising R0 may prove to be of concern, but this could only be determined if testing rates remained constant since the number of tests could affect the reporting of new cases.

He was also concerned about sporadic cases in the community.

“If the investigation of each positive case is not done properly, we might miss contacts which would spread further to others,” he added.

He said to some degree, the lockdown and vaccination programme had been able to bring down the transmission rates.

But he said the authorities needed to identify the source of Covid-19 cases, which mainly come from workplace clusters currently, and potentially also community clusters.“We also need to improve the vaccine rollout. We need to secure the supply and quickly vaccinate the population. There is no magic or faster way out,” he added. 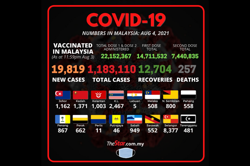