PETALING: The Works Ministry has ordered the Malaysian Highway Authority and an independent consulting engineering firm to complete a report on the scaffolding incident on the Damansara-Shah Alam Elevated Highway (DASH) within a week.

The ministry added that it has issued a stop-work order to DASH developer Projek Lintasan Damansara-Shah Alam Sdn. Bhd (Prolintas) and also said that it will also review the report from the Department of Occupational Safety and Health (DOSH).

It said in a statement on Sunday (June 20) that it expressed regret for the incident that injured two Bangladeshi workers on Saturday (June 19).

The ministry also said that during the concrete pouring process that led to the accident, the whole construction area was fully closed from the public in line with the current standard operating procedures.

"Works using the same engineering methods had involved 14 locations in the area, and four of them has been completed. The incident took place at the fifth active site," said the Ministry.

It added that the initial checks by the Malaysian Highway Authority showed the scaffolding design was conducted in proper order and has been certified by the Consulting Engineer.

"The rest of the work, involving 10 locations can only proceed after the audit report by the Independent Consulting Engineer has been completed," said the ministry.

It added that the concessionaires had also been ordered to provide appropriate assistance to all the victims involved and that as a safety precaution, the right lane on both ways of the South Klang Valley Highway (SKVE) at the area had been closed.

The metal scaffolding of a highway under construction along the Sungai Buloh - Kota Damansara stretch of the DASH collapsed on Saturday injuring two workers on site.

The incident was reported at 7.14pm before a team from the Sungai Buloh Fire and Rescue Department arrived at the scene 13 minutes later.

Two Bangladeshi workers who were on duty underneath the 12 metre-tall construction site suffered light injuries in the incident, said Selangor Fire and Rescue Department director Norazam Khamis, in a report by Sinar Harian. 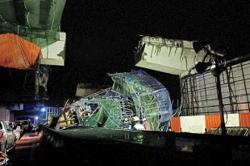