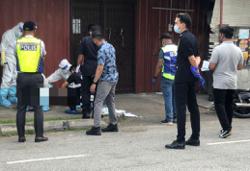 GEORGE TOWN: A morning walk for a 61-year-old stroke survivor turned into a tragedy when the man was knocked down by a getaway car in a high-speed police chase at Jalan Perak here.

Teoh Kar Hin was walking across the road which had no traffic in sight at that time when he was hit by the car.

Bystanders rushed to his aid but Teoh died at the scene.

Economy rice seller Khor Say Peng, 48, said the victim was a regular at his stall prior to the lockdown.

He said the man suffered a stroke 20 years ago and walked with a limp.

“Prior to the pandemic, he would walk from his house in Jelutong to Bukit Dumbar Recreational Park every morning and stop at my coffee shop for a meal, ” said Khor.

He described Teoh as a chatty person.

George Town OCPD Asst Comm Soffian Santong said they had arrested a 46-year-old man, who is the driver of the getaway car, in Batu Uban and found three packs of suspected heroin, several mobile phones and an electronic weighing scale with him.

Police said the suspect was believed to have been high on drugs when the chase started from Jalan Datuk Keramat at 6.40am yesterday after two policemen patrolling the area spotted the man behaving suspiciously at the P. Ramlee Road-Perak Road traffic light junction.

“The victim was crossing the road on crutches.

“He was thrown around 10m to 15m after being hit by the car, ” said ACP Soffian.

“The suspect continued speeding and even ran over the body, ” he added.

“We obtained security camera footage from a nearby shop as proof that he hit the victim, ” he said, adding that police are looking for Teoh’s next-of-kin.

During the chase, police managed to corner the vehicle at Jalan Batu Uban Dua and instructed the driver to surrender.

But he tried to ram one of the policemen.

Police fired two shots at the fleeing car, with one hitting the rear tyre and the other the front of the vehicle, before apprehending the suspect.

ACP Soffian said the vehicle was registered to a rental car company in Bayan Lepas.

The initial police investigation also revealed that the suspect, from Kampung Melayu, Ayer Itam, is a grass cutter and has a prior criminal record, he added.

Police have classified the case as murder and obstructing a civil servant from carrying out duties.