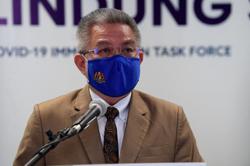 PUTRAJAYA: The price of Covid-19 tests has been capped to ensure that it remains reasonable while the battle against the pandemic rages on, says Health Minister Datuk Seri Dr Adham Baba.

He said the capped prices were gazetted under the Emergency (Essential Powers) Ordinance 2021 on May 11 to serve as a guideline for the public when paying for such tests.

He advised people who believed that they had been overcharged

for Covid-19 tests by laboratories and hospitals to lodge complaints with the Crisis Preparedness and Response Centre (CPRC).

“We used the Emergency Ordinance to cap the prices for such tests.

“If the price is more than what has been set, those responsible will have to itemise what the additional charges are for,” he said yesterday at his weekly joint media briefing with National Covid-19 Immunisation Programme coordinating minister Khairy Jamaluddin.

The government has set the ceiling price for polymerase chain reaction (RT-PCR) tests at RM150, RTK-Antigen tests at RM60 and RTK-Antibody tests at RM50 in Peninsular Malaysia.

The ceiling price for RT-PCR tests in Sabah and Sarawak is RM200, RTK-Antigen tests (RM80) and RTK-Antibody tests (RM70).

Dr Adham said 628,110 screenings were carried out nationwide from June 6-12 (Epidemiology Week 23), where the positivity rate was 6.65% with 41,630 individuals testing positive.

Selangor had the highest number of screenings carried out for the week at 147,141 where the positivity rate was 8.85% with 13,917 people testing positive.

Dr Adham said between April and June 13, there were 59,895 Covid-19 patients recorded under Categories 4 and 5, with 1,413 of them succumbing to the disease.

To a question on the usage of intensive care unit (ICU) beds to treat Covid-19 patients, he said that out of 1,767 beds available, 1,116 were currently occupied.

The number of patients in ICUs requiring ventilators was 452 as of yesterday.

On another matter, Dr Adham said the authorities had received an average of 2.4 reports on immunisation side effects for every 1,000 Covid-19 vaccine doses administered.

He said this was the number of incidents reported to the National Pharmaceutical Regulatory Agency, while reports via the MySejahtera app were at 29.3 per 1,000 doses.

“Only 0.09 out of every 1,000 vaccine doses administered were regarded as serious adverse events following immunisation, where treatment or hospitalisation was required,” he added.