KOTA KINABALU: Abu Sayyaf sub commander Injam Yadahm, who is linked to cross-border kidnappings in Sabah has been killed by Philippines security forces.

Also killed in a shootout at 2am Sunday (June 13) was Al-al Sawadjaan, the younger brother of Abu Sayyaf sub-commander Mundi Sawadjaan, who was responsible for the Jolo Cathedral bombings two years ago.

The two were among four killed by the Philippines military as they continued the pursuit for Abu Sayyaf leaders and foot soldiers, many of whom are linked to the notorious Sawadjaan family, known to be holding kidnap victims at their Patikul base in Jolo island.

The two others killed in the Sunday morning shootout have yet to be identified.

With the noose tightening on the group, intelligence sources said their numbers have been dwindling, with less than 50 active members as the rest have either been killed or run off since Philippines President Rodrigo Duterte ordered an all-out war against Abu Sayyaf.

Philippines Joint Task Force (JTF) for Sulu Major Gen William N. Gonzales said that they went into the area to serve a warrant to Yadah at his house but were met with gunfire.

Yadah, who has also been involved in beheadings, has long been hunted by the Philippines military.

He was a key player in the kidnap of five Indonesian nationals taken from Malaysian waters in January 2020. The kidnap victims were rescued in Tawi-Tawi earlier this year. 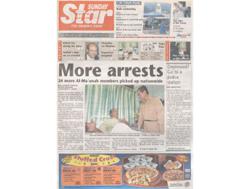