Coping with the pandemic 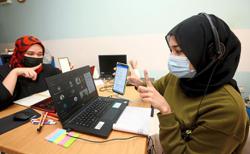 PETALING JAYA: Having to contend with the lockdown, a lack of farmhands and now the dry spell, vegetable and fruit farmers are turning to varieties which are easier to grow to stay afloat.

Some have also resorted to reducing the size of their farms, with the enterprising ones offering their produce for sale on online platforms.

Malaysia Federation of Vegetable Farmers Association president Lim Ser Kwee said with demand for vegetables and fruits having gone down over the past year, he had cut his vegetable varieties by about a third.

Based in Simpang Renggam, Johor, Lim said he had cut down his vegetable varieties by 30% to reduce losses.

“I used to grow different types of leafy greens like mustard green, spinach and lettuce.

“Now I focus more on growing corn and pineapple, which are easier to grow and have a longer shelf life. These require fewer farmhands too, ” he added.

Lim said from 50 foreign workers, he now depended on fewer than 20.

“Farmers are having to compete with other sectors which offer foreign workers higher pay. This is a headache for us, ” he said.

Lim said compared to last year, farmers were better prepared to face the uncertainties caused by the latest lockdown.

“During MCO 1.0, many were still able to spend and willing to buy from farmers directly and pay for delivery.

“But it is not the same this time, as consumers are cutting down on expenses after battling the pandemic for over a year. They’d rather buy in small quantities, ” he said.

The federation is the umbrella body of 28 vegetable and fruit farmer associations nationwide with over 10,000 members in total.

Due to weaker purchasing power among consumers, Lim said prices of local vegetables had been fluctuating.

“To cut losses, some farmers have even shrunk their farms by up to half, besides cultivating fewer varieties, ” he said.

Lim said farmers had also benefited with the experience of going through many changes in the SOP since the start of the pandemic.

“We were caught off-guard last year when MCO 1.0 was announced and ended up heartbroken, with large quantities of produce ending up in the trash because we had no way of sending it to the markets and consumers. We certainly want to avoid this scenario, ” he said.

To ensure the sustainability of essential supplies, Lim urged the government to consider the conditional entry of foreign workers.

“There are many essential sectors in need of foreign workers and agriculture is one of them. In fact, we have a pool of regular workers who are interested to work.

“The government can make it compulsory to test and quarantine them, and we employers are willing to foot the bill, ” he said.

“Demand has dropped but the selling price is still stable. This is because we have learned from last year’s experience in managing and handling the pandemic, ” he said.

However, Tan appealed to the government to allow the industry to be allowed to operate as usual, adding that the workforce cap and operating hours limitation would affect production soon.

“Supporting industries such as feedmills, and slaughtering and processing plants are also important. We hope the government will allow us to operate at full strength to provide sufficient food supply, ” he said.

He said livestock farmers were caught off-guard with the SOP requiring them to slash their workforce and limit operating hours, adding that such requirements were not in place during MCO 1.0.

“We are in an essential industry which is labour intensive. If the government wants us to reduce our workforce, it will certainly affect production.

Tan said limiting operating hours from 8am to 8pm was not feasible for the industry.

“Between night and morning, we deliver processed and chilled chicken to the markets. Some companies distribute chicken and eggs across the country, ” he said.

Tan also said at the poultry farms, physical distancing was maintained as a worker attending to one flock was far from the other worker.