The 21-year-old, who speaks her native Kadazandusun dialect fluently, will now become an “ambassador” for Sabah as well as promote the state’s products during her tenure as the Unduk Ngadau 2021.

Winning the crown also sees Hejnowska picking up some RM66,830 worth of prizes, including RM25,000 cash and an education scholarship worth RM35,000 from North Borneo University College.

Hejnowska, whose mother is a journalist with a local newspaper, first won the Api Api harvest beauty queen contest earlier in May to qualify herself for the state-level finals that saw her beat 21 other finalists from across the state.

In an earlier interview with The Star, she said that her grandmother insisted that all her grandchildren speak to her in Kadazandusun, which was why she was fluent in the language as it was spoken at home all the time.

She said people with mixed parentage could call themselves true Sabahans if they live here, speak the language, learn the culture and history of their own ethnicity, and most importantly – be nice to all.

“Culture is about how we live our day-to-day lives while incorporating traditions – be it the language we speak, the food we eat or anything related – it is not just about blood and ethnicity, ” she said in the interview.

The first runner-up was Dianarin Vahidin, the Paginatan beauty queen from the Ranau district.

The Unduk Ngadau is held to commemorate the legend of the kind and beautiful Huminodun, the daughter of Kadazandusun gods Kinoingan and Sumundu, who sacrificed her life to save the people from a famine.

Kaamatan, which is celebrated to give thanks to the “rice spirit” for an abundant harvest, was held via online streaming due to the Covid-19 SOP and restrictions. 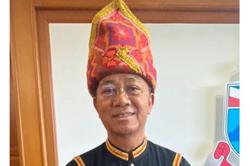