Removal of bunting in Labuan to mark red zones questioned

KOTA KINABALU: The removal of bunting to identify red zones in Labuan by the Labuan Corporation (LC) has been questioned.

Labuan has been under an enhanced movement control order (EMCO) since May 26.

Locals feel that the move to order the Labuan Health Department to take down the bunting as it did not conform to local by-laws was not necessary, especially at this time when the nation is trying to stop the spread of Covid-19.

"It is against the government's efforts to battle the Covid-19 in all areas of the island," Labuan Chinese Chamber of Commerce president Datuk Wong Kii Yii said on Friday (May 28), adding that the bunting was to inform public that they were entering red zones.

Following the order to remove all bunting, LC said on Thursday that the Health Department was given a permit to put up 35 bunting, but many were placed at road intersections that could block the view of motorists.

The LC said this was against by-laws and their removal was ordered. It was learnt that more than 35 bunting were put up.

Labuan was placed under EMCO for 30 days from May 26 and the island has been divided into five zones. Inter-zone movement is not allowed.

The Labuan Indian Chamber of Commerce and Industry chairman Datuk Dahlif Singh called on authorities to allow for inter-zone travel for those who have been fully vaccinated.

He said this could also encourage people to get vaccinated. 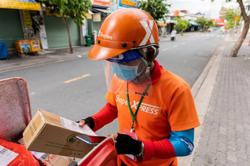 INTERACTIVE: Share of fully vaccinated population in Malaysia now higher than in US
S’wak first to give booster shots
Good initiative but further studies may be needed
Only 1.5% of new cases in serious categories
More than 19 million adults fully vaccinated
Blood donors get free Covid-19 self-test kit
Former patients thankful for care given
Woman loses RM53,000 in phone scam in Penang
Elderly woman, who is Covid-19 person under surveillance, found dead in ditch
Covid-19: Another 13,104 cases, 1.5% in categories 3, 4 and 5