SHAH ALAM: Police have clarified that no summons was issued during an exchange between a man and police at a roadblock, which was recorded on a viral video.

"Following the incident, a Facebook post showing a conversation between a policeman and a driver had been uploaded, where the driver was asked to produce his authorisation letter to travel and his purpose for doing so.

"The policeman only explained to the driver of the SOPs but no summons was issued," he said.

ACP Baharudin also clarified that there were no rules preventing travel before 8am and after 8pm. He was asked to clarify the matter as the policeman in the video was heard saying that this was against the MCO SOPs.

"All misunderstandings and difficulties are very much regretted. We work and pray for the best for us all," he said.

The video uploaded on Wednesday showed dashcam footage of the traffic stop.

When the policeman stopped the driver's car, he could be overheard asking for his reason for travelling and to produce an authorisation letter.

After the driver failed to show any such letter, the policeman said that going against the set SOP is a RM2,000 summons. 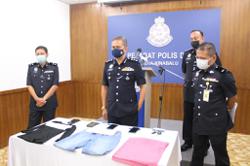