‘Pets should not be dumped’ 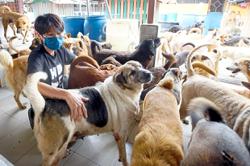 Best friends: Barbara with some ‘residents’ of the animal shelter in Teluk Bahang.

GEORGE TOWN: Many pets are being dumped after their owners find they cannot afford to care for them after losing their jobs due to the Covid-19 pandemic, says Penang Animal Welfare Society (4PAWS) founder Barbara Janssen.

“I’ve received many calls about dogs being dumped at housing estates or markets, and many of them have been found in bad condition.

“These dogs wander aimlessly along roads and pose a danger to road users as they are scared and have never been in such a situation before, ” she said.

Janssen said she would like to take them all in but this was not possible as her shelter in Teluk Bahang has more than 600 dogs.

“Dogs are very loving creatures and they do a lot for us such as guarding our houses and keeping us company.

“They should not be unceremoniously dumped just like that. They should be allowed to live out their lives in comfort.

“To prevent the increasing number of strays, pet owners must ensure their animals are spayed or neutered when they come of age, ” she said.

The shelter is having its own problems due to Covid-19 and donations have drastically dropped because money-raising activities such as Pawathon and jumble sales are not allowed to be held.

Janssen said the public could help the shelter by donating to the Penang Animal Welfare Society as more than RM30,000 was needed monthly for food and medication.

“It will also be good if the public can donate dry food or frozen chicken for the dogs.

“We are a ‘No Kill Shelter’ and we try our best to give the dogs a place. If they are not adopted, we will keep them until they die, ” she said, adding that more information on the shelter could be obtained from its Facebook page (www.facebook.com/4PAWS.penang).Other shelters in need of food and donations are Meowy Cat Shelter in Balik Pulau (www.facebook.com/meowycatshelterpenang, which is mainly for handicapped, injured and vulnerable cats and kittens, and Cat Beach in Teluk Bahang (www.facebook.com/catbeachpenang).