Parks and recreation vs the pandemic

Even if it’s crowded, being outdoors in Rizal Park, Manila, is much safer than dining in restaurants or doing other allowed indoor activities amidst the Covid-19 pandemic, says the writer. — Filepic

I get asked this every time I advocated for allowing outdoor activities amidst the pandemic in Manila. I would argue back by saying that even a crowded Luneta (also known as Rizal Park) on a Sunday is much safer than indoor dining or other activities that the Inter-Agency Task Force for the Management of Emerging Infectious Diseases (IATF-EID) has prioritised over the past year.

While many agree that there is safety in the outdoors, they argue it is impossible to implement this in Manila where there are few parks.

In any case, now that the World Health Organisation has finally, belatedly, acknowledged the importance of ventilation, the IATF-EID must update their thinking. We have more green spaces than we realise: Think of the vast campuses in Diliman that have remained closed throughout much of the pandemic despite being relative safe spaces.

But I get their point: Metro Manila has no large parks and green spaces that will allow a significant proportion of the population to go about their everyday physical and social activities in the safety of the outdoors.

In contrast, for example, in Mexico City, the Bosque de Chapultepec is vast enough – 686ha compared to Rizal Park’s 58ha – to safely accommodate the thousands of people who flock to its lagoons and picnic grounds on weekends. People are not required to wear masks, let alone face shields, while exercising, and it’s perfectly possible to be several meters away from anyone.

Beyond Chapultepec, there are several other parks, plus the pedestrian median in Paseo de la Reforma. Further out – but also just an Uber ride away – are the national parks of Desierto de los Leones and Cumbres del Ajusco.

This brings us to the question: Why don’t Philippine cities have enough parks?

As urban planners have long lamented, part of this has to do with government failure to implement whatever plans have been conceived since the Spanish and American colonial periods; the longstanding divide between Manila’s vast exclusive villages and the rest of the city; the “mallification” of the city that basically created mostly indoor “privately- owned public space”; and a car-centric mobility paradigm, among other factors.

I would add that a deeper problem is a low regard for the outdoors even before the pandemic. The fact that the government can even contemplate cutting 500 ipil-ipil trees in Nayong Pilipino to make way for a completely unnecessary “mega vaccination” centre reflects this noxious mentality – one that, good intentions notwithstanding, has led to unreasonable restrictions in what little outdoor spaces we have.

To be fair, we are not alone in this thinking; even in Mexico, it took a while for authorities to recognise the outdoor/indoor distinction, leading local mountaineers to point to the irony that for a long time “the malls are open but the mountains are closed”.

As in the Philippines, a coalition of advocates – outdoor enthusiasts, health professionals, urban experts, environmentalists – have been critical in pushing for green public spaces, toward a more walkable, bikeable, liveable city.

Regardless of country, it is clear that keeping people, including children and seniors, locked indoors is unsustainable, and that creating – as well as facilitating access to – parks and other public (and preferably green) spaces must be part of the public health agenda. As the compelling evidence of airborne transmission underscores, the outdoors are a safe space, and we need to carve more such spaces if we are to effectively address not just the pandemic, but also the poor quality of urban life. — Philippine Daily Inquirer/Asia News Network

Gideon Lasco is currently based in Mexico City to study Mexico’s popular and political responses to Covid-19. 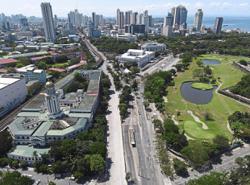