PETALING JAYA: The Organisation of Islamic Cooperation (OIC) cannot simply wait for the intervention of the United Nations (UN) to act in the Palestine conflict as more people are being killed, says Datuk Seri Hishammuddin Hussein.

The Foreign Minister said while the OIC needs to urge the UN to provide international protection for all in the occupied Palestinian territory, the OIC should also immediately step up and help the Palestinians in any way possible.

“We cannot just keep talking, we must show the world that Muslim nations are here to help,” he said during an OIC virtual extraordinary meeting on Sunday (May 16).

He said the OIC must also pressure the United Nations Security Council (UNSC) to rectify its failure and shoulder its responsibility in maintaining peace and security.

“The OIC needs to pressure the UNSC to act urgently, enforce its resolutions, and uphold the rule of law.

“Israel must be made to fully comply with all its obligations as prescribed by relevant UNSC resolutions, including Resolution 2334 and international law, as well as the Charter of the United Nations,” he said.

He said many Malaysians, including himself, were disappointed by the UNSC's inability to immediately halt Israel’s escalation of violence against Palestinians.

He added that OIC member states also needed to urge civil society worldwide to continue the call for accountability and highlight gross violations of international law in the occupied Palestinian territory.

“Their role is vital in shaping public opinion and providing pressure from the bottom up. I have also personally witnessed and praise the efforts of many Malaysians who are relentlessly condemning atrocities against the Palestinian people online,” he said,

He said the international community must also continue to find a lasting solution to the conflict, with urgent action to address the root causes and return to a meaningful peace process to end the Israeli occupation.

“Without unity, the Muslim ummah will falter into disarray and (that) belies the very reason for establishing this esteemed organisation in the first place,” he said.

Hishammuddin said as more misery is inflicted upon the Palestinians, the lack of political will should no longer be tolerated as an excuse to perpetuate Israel’s occupation.

He said that while unintentional, they had shamefully contributed to encouraging the occupying power through their inaction.

To date, more than 130 Palestinians have been reportedly killed with hundreds more injured as a result of the ongoing violence.

The Al-Aqsa Mosque has been attacked since May 7 while Gaza has been bombarded by military airstrikes since May 10. 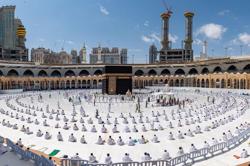