The fire that razed 35 houses in Kampung Meruntum, Putatan on Saturday.

KOTA KINABALU: A total of 221 Kampung Meruntum villagers in Putatan lost their homes in a blaze that burnt down 35 houses at the coastal village on Saturday (May 15).

No injuries were reported among the villagers but three firemen received electric shocks while extinguishing the fire.

They were reported to be in stable condition.

Some 62 fire victims were temporarily housed at the Serigai multipurpose hall, according to the state Civil Defence Force.

The state Fire and Rescue Department are still trying to determine the cause of the fire.

A spokesman said a distress call was received at 5.40pm and the firefighting operation started at 5.53pm.

The fire was brought under control at 10.01pm, and the operation was completed by 11.27pm.

A total of 54 firefighters from three stations – Penampang, Kota Kinabalu and Lintas – were assisted by 10 military firemen.

The Civil Defence Force disaster management secretariat said on Sunday (May 17) another relocation centre was set up at Dewan Keramat as a standby, since the first one was full.

However, it is learnt no victims have registered there yet.

State Community Development and People’s Wellbeing Minister Shahelmey Yahya, who visited the scene on Saturday night and Sunday morning, said it was a trying time for those affected because the incident occurred on the third day of Hari Raya.

The Tanjung Keramat assemblyman said rebuilding will be discussed later, with the current focus on registering all the victims of the fire and distributing assistance to them.

“We will discuss further action with the state government and Putatan District Office.

“Right now we want to update data so that assistance can be rendered to those affected, ” said Shahelmey, adding that 45 families have registered so far. 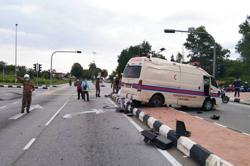