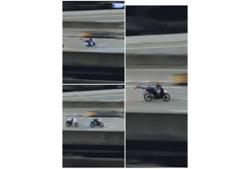 KUALA LUMPUR: Police have arrested five suspected mat rempit following an operation along the Duta-Ulu Kelang Expressway on Sunday (May 16).

City Traffic Investigation and Enforcement Department chief Asst Comm Zulkefly Yahya said the operation was conducted at around 3am.

"We arrested the five, aged between 17 and 25, who were seen performing various dangerous manoeuvres on their motorcycles.

"Three of them were seen zig-zagging as well as doing the superman pose," he said when contacted on Sunday.

He said the suspects included a hotel technician, postman, mechanic, and delivery rider.

"We also seized five motorcycles," he said, adding that police were investigating the suspects under Section 42(1) of the Road Transport Act 1987 for reckless riding.

"Those caught will face stern action using all available laws," he said, urging those with information on such activities to contact the City police hotline at 03-2115 9999.