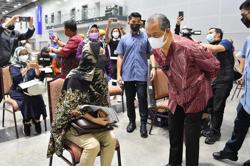 KUALA LUMPUR: Those who do not have appointments to receive their Covid-19 vaccines should not turn up at designated centres "trying their luck" to get one, says Khairy Jamaluddin.

The coordinating minister for the National Covid-19 Immunisation Programme was at the World Trade Centre Kuala Lumpur (WTCKL) here on Saturday (May 15) morning and witnessed a large crowd in the area.

''Many tend to come at the end of the day to try their luck but this is causing a crowd and it's risky, '' he said, referring to people who were not registered nor on the waiting list who had turned up hoping to get vaccinated should anyone miss their appointments.

He pleaded with those without appointments to stay away as it would lead to congestion and compromise physical distancing.

"For those with appointments, do not come too early to wait because that too, would create a crowd.

"Just come about 15 minutes to 30 minutes earlier. It is because of this now we had to manage the crowding problem at WTCKL," he said after an ad-hoc visit to the WTCKL vaccination centre here on Saturday.

Close to a thousand people were seen flocking to the vaccine dispensing centre located at the WTCKL.

With over 16,000 people scheduled to get vaccinated at WTCKL over the weekend, people have been arriving earlier than their scheduled appointment, creating a crowd outside the building.

Those with appointments are only allowed into the building according to their allotted times.

Some expressed concern as there was no crowd control.

"There was no police or Rela personnel outside to control the crowd," said a man who only wanted to be known as Razman, from Old Klang Road, whose appointment was at 11.30am.

The 42-year-old said that many did not know where to queue up or to wait, adding that he only managed to find out when he asked.

"There should be signs and markings on the floor to make things clear for the people, especially as there are so many of us," he said.

CH Lee, 39, from Seputeh, said the vaccination process went well despite some confusion and disorganisation outside WTCKL initially.

"Once inside the flow was straightforward and we were told to queue up in sections before we moved on to the next area.

"So we must be alert as there are frequent announcements," he said.

Khairy reminded high-risk individuals who are likely to have been exposed to Covid-19 cases not to turn up and reschedule their vaccination appointments.

"Those who are close contact or patients under investigation (PUI) in MySejahtera should not come as they may spread the virus to others.

"They are not supposed to be here but stay home instead. We can reschedule the vaccination appointment, just let us know," he added.