Good, healthy food: Thilsted holding prepared fish in a market in Cambodia. Her pond polyculture system has helped millions of people worldwide put nutritious food on their plates, earning her the prestigious award.

PETALING JAYA: It’s a fishy story but in the best way possible. A fish farming system that has put nutritious food on the plates of millions just earned its inventor the 2021 World Food Prize Laureate award.

Nutrition expert Dr Shakuntala Haraksingh Thilsted, a Danish citizen based in Penang, has also become the first woman of Asian heritage to be given the honour.

“I’m truly honoured and deeply humbled, ” said Thilsted in an interview upon receiving the award by the World Food Prize Foundation for individuals with exceptional achievements in food security and innovation on Tuesday.

She said the award is an important recognition of the essential but often overlooked the role of fish and aquatic food systems.

“Fish is a superfood, especially to keep children and mothers well nourished and strong.

“It is important that children receive nutritious food for their first 1,000 days.

“With fish, they will have multiple nutrients including vitamin B12 and essential fatty acids that are crucial for brain development and cognition, ” added Thilsted, the global lead for nutrition and public health at WorldFish, an international research institution headquartered in Bayan Lepas, Penang.

From her research, she developed the pond polyculture system, where small and large fish species are farmed together in the same water body like wet rice fields.

Instead of competing with each other, the different fish varieties increased total production and produced higher nutritional value.

While the larger fish can be sold for extra income, the nutrient-dense smaller fish can be consumed by vulnerable communities as part of a healthy diet.

In Bangladesh, Thilsted’s fish-based approach prompted the government there to promote pond polyculture as a means of tackling malnutrition, according to a statement by the World Food Prize Foundation.

Inspired by her grandmother’s cooking, Thilsted, who is from a family of Indian Hindu migrants to Trinidad and Tobago, also developed a highly nutritious fish powder and fish chutney recipe,

In a statement, US Secretary of State Antony Blinken said millions of low-income families across countries are eating small fish regularly in the form of chutneys to porridge, giving key nutrients that will protect children for a lifetime.

“Good nutrition can improve human capital and drive sustainable development. We are proud Dr Thilsted’s work is highlighting how aquatic foods can benefit both human health and the environment, ” she said. 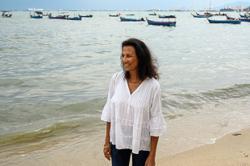