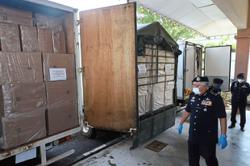 No sneaking past: A patrol car faces off with motorists attempting to cross the state border via a rat lane between Pinang Tunggal, Penang and Kulim, Kedah. — ZHAFARAN NASIB/The Star

“So don’t try to find your way out of the state during the Hari Raya period. We will take action if we catch you, ” he said.

To enforce the start of the movement control order in three districts and three sub-districts in Penang beginning yesterday, police set up 42 roadblocks in the state.

A check by The Star at one of the routes in Pinang Tunggal showed cars and motorcycles plying the 5km dirt-and-tar road.

A local known only as Musa said the route along the hinterland of Sungai Muda riverbank was used by those from Pinang Tunggal and Pantai Prai in Padang Serai, Kedah.

“It is mainly used by villagers from Kampung Ekor Kucing, Kampung Pantai Prai and Kampung Terat Batu in Kedah.

“We use it to commute between our workplace and home, ” he said.

He said the routes were at a riverside road at Kampung Ekor Kucing, Pinang Tunggal near the Penang-Kedah border, a mini tarred road at the Kampung Selamat-Padang Serai border, and Ara-Kuda/Lunas along Jalan Tun Sardon.

“We have increased our patrols here to ensure no unauthorised travel during the MCO, ” he said.

Central Seberang Prai OCPD Asst Comm Shafee Abd Samad said his men would keep a close watch on those coming in from Kulim or Kubang Semang in Kedah.

“Think twice before you come in. If you manage to come in, then you might not be so lucky when you want to leave the state, ” he said.

ACP Shafee said he had instructed his men to increase patrols at seven illegal routes identified in the district during the festive period. 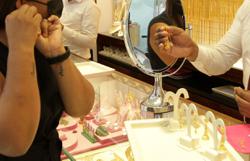