PUTRAJAYA: Nearly half of the country's new cases were recorded in the Klang Valley, where the third movement control order (MCO 3.0) has been implemented in most districts.

Selangor had 32% of the country's new cases, after reporting 1,137 more infections.

Kuala Lumpur has 477 new cases, which is the second highest figure out of all states.

As of Thursday, Malaysia's cumulative Covid-19 infections is at 427,927 after the country registered 3,551 more cases for the day.

Dr Noor Hisham said the deaths involved those aged to 31 and 92.

"There are 19 deaths in the country, which were reported in Sarawak (five), Johor (three), Selangor (three), Kelantan (two), Kuala Lumpur (two), Kedah (one), Negri Sembilan (one), Pahang (one) and Terengganu (one).

"There are 18 cases involving Malaysians and one foreigner. The Health Ministry expresses its condolences to family members," said Dr Noor Hisham, who added that nearly all the deceased had underlying conditions such as high blood pressure and diabetes.

There were five cases where victims were declared as "dead on arrival".

There are currently 354 patients being treated at intensive care units nationwide, with 199 requiring ventilator support. 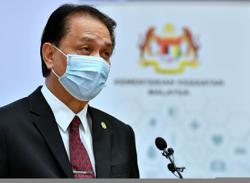