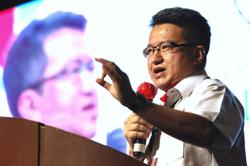 Dr Boo made it into the list as a committee member while Tan, who was a former DAP state secretary, failed to make it.