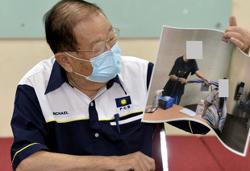 KUALA LUMPUR: Left with no choice after constant harassment by loan sharks, an 89-year-old woman announced her decision to disown her 64-year-old son in an emotionally charged press conference, which came after she beat him multiple times with an umbrella.

MCA Public Services and Complaints Department head Datuk Seri Michael Chong told reporters the loan shark matter was first brought to his attention by Kong Sew Koi and her son Chong Khee Voon when they met him on Monday.

“During their explanation, Kong stood up, took an umbrella and started beating her son – she hit him more than 10 times.

“In fact, this is the first time I saw a lady beat up her own son in front of me. The umbrella nearly broke.

“I was so shocked, but I managed to stop her. If I hadn’t been ill, I would’ve whacked him too, ” quipped Chong, who had recently contracted Covid-19.

Kong said since October last year, she believed her son had borrowed from 15 different loan sharks, for sums amounting to RM45,000, to fund his gambling habit.

She added that she and her grandchildren have been constantly harassed by loan sharks, who also recently splashed red paint at their house, and on some occasions even locked up the house to stop the family from going out.

There were even voice messages by a lady named “Evelyn Choong”, believed to be one of the loan sharks Khee Voon had borrowed from, threatening her grandchildren.

“We will find you at school. You are so pretty. Go to school, and we will tell everyone that your father owes us money, ” said the voice message, which was played at the press conference.

Later, Kong broke down in tears, saying she feared for her grandchildren because of these threats.

“I had to beat him that day. I told him he is an animal. I don’t even have any more money for my funeral, ” said a sobbing Kong.

Chong also said it was inappropriate that Kong’s son had expected him (Chong) to renegotiate borrowing terms with the loan sharks.

“Her son asked me to speak to the ‘ah long’ and tell them not to charge interest. I said ‘no’, because I know if I had helped him, he would borrow again and the cycle would repeat, ” he added.

Chong said he would accompany Kong to lodge a police report over the threats by the loan sharks.

“I want the police to take action against these loan sharks who also threatened to kidnap her grandchildren, ” he added.