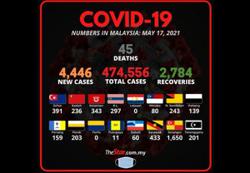 PETALING JAYA: The number of daily Covid-19 cases has once again hit the 3,000 mark, a trend not seen since the beginning of this year.

“Of this, 819 cases were from clusters and screening of close contacts in the field," he said in a statement.

This was followed by Kelantan with 523 cases and Kuala Lumpur with 440 cases.

He also said 15 deaths, all involving locals, were recorded, pushing the total fatalities so far to 1,477.

“A total of 306 patients were warded in the intensive care units with 151 of them requiring ventilator support, ” he said.

The number of infections remained high early in the year with over 3,000 cases for eight days in a row, beginning Jan 14 and reached a record high of 5,725 cases on Jan 29.

On March 29, the number of daily cases dropped below the 1,000 mark with 941 cases but has since shown a steady increase in the following weeks.