According to a statement posted on Istana Negara’s Facebook page, their Majesties expressed their sadness over the loss of the crew, and hoped that the families of the crew remain strong in facing these tough times in the month of Ramadan.

"Their Majesties pray that the people of Indonesia remain strong and be given the strength to face this challenge.

"The King and Queen also pray that the souls of those sacrificed be blessed by Allah and placed among the righteous, ” said the statement.

The 44-year old KRI Nanggala-402 with 53 crewmembers on board lost contact on Wednesday (April 21), as it prepared to conduct a torpedo drill.

Indonesian President Joko Widodo said on Sunday (April 25) that the country's missing submarine had been found sunken in the Bali Sea after search teams said on Saturday (April 24), that they found objects including prayer mat fragments and a bottle of periscope lubricant near the submarine's last known location.

In a statement posted on his Facebook page, Muhyiddin said he hoped that the families of those lost would be given strength and patience during this trying time.

"Malaysia is always ready to continue providing the help needed to get Indonesia through this difficult time," the statement said.

Rescuers find debris thought to be from sunken Indonesian submarine 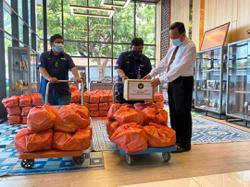