KUALA LUMPUR: Vernacular schools have not been a hindrance to national unity, but “threats” from certain parties towards such schools could lead to the destruction of the country’s unity and harmony, says Malaysian Chinese Language Council president Datuk Eddie Heng Hong Chai (pic).

Over 20% of students at Chinese schools are non-Chinese, which makes them multiracial institutions, he said.

“Vernacular schools (which consist of Chinese and Tamil schools) are part of the national education system and are protected by the Constitution and the Education Act.

“Although the medium of teaching is different (from SKs), all teaching content is provided by the Education Ministry, meaning they are in line with the national education policy, ” said Heng during a joint press conference with Gabungan Seni Khat Action Team (Sekat) and non-governmental organisation kitabantukita.org here on Friday (April 23).

The press conference was regarding Subang Umno chief Datuk Armand Azha Abu Hanifah’s protest held on April 19 against the construction of SJK (C) Too Joon Hing in Puchong, Selangor.

Armand Azha had argued that the location did not need a Chinese school as it was a Malay-majority area.

“All matters can be discussed and resolved in a civilised manner. By conducting a protest, you are stirring up unnecessary emotions.”

Arun said that national unity would not be threatened by the existence of vernacular schools.

He spoke about the increasing number of non-Chinese parents opting to send their children to vernacular schools because of the quality of education offered and the chance to learn an extra language.

“We can achieve unity through diversity, ” he said.

Representing kitabantukita.org at the conference, Prof Mohd Tajuddin said emphasis should be placed on bigger issues such as instilling the spirit of lifelong learning among children and producing graduates who are capable of becoming “global citizens”.

“We must stop that (mindset) and instead start producing a workforce that is adaptable and capable of being global citizens, who can think of the bigger picture.

"When they can think of the bigger picture, it would mean they become more understanding and tolerant towards one another, ” he said.

A police report against Armand Azha has been lodged on Friday at the Dang Wangi police station. 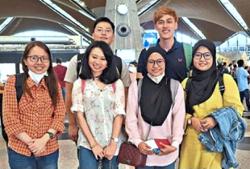 The ugly truth about beauty filters
Landed properties worth RM500mil left abandoned
Udini House, oldest abandoned mansion, worth RM30mil
Living next to unoccupied buildings means living with lizards and snakes
Exotic yet can be pet-rifying
From tarantulas to snakes, pet owners can’t resist the pull
Six of our best young scientists at Nobel meet in Germany
Review on bankruptcy threshold
RM80bil in subsidies this year, highest in history
More than 16 million adults have gotten their booster shots