SHAH ALAM: The Shah Alam High Court has ruled on Friday (April 23) that the detention of Nigerian Simon Momoh for 39 days to be unlawful and ordered him to be released.

High Court judge Datuk Ab. Karim Ab. Rahman had ruled that the detention was in violation of Article 5(4) of the Federal Constitution, which requires a non-citizen to be presented before a magistrate within 14 days from the date of arrest.

He said that the Immigration Act in Section 51(5)(b) incorporates this safeguard for the proper administration of law.

Momoh was however not brought before a magistrate for detention beyond 14 days.

His lawyer Vemal Arasan said that the court found the detention of Momoh to be unconstitutional and to be released as soon as practical.

The Prisons Department, Immigration Department and the Home Ministry were the three respondents to the petition.

His wife Low Kar Hui was grateful for the judgment, saying it had been a difficult time for her and their two young daughters.

Momoh was initially arrested on March 15 on suspicion of driving under the influence of alcohol.

He pleaded guilty and paid the RM12,000 fine he was given, as well as served his one-day jail sentence.

However, Momoh who had a valid long-term spouse visa was not released but instead transferred to the Kajang Prison on March 16.

He was then transferred to the Immigration Detention Centre in Semenyih on April 7 and faced the possibility of deportation to Nigeria.

His long-term spouse visa, which was valid until Oct 14 next year, was revoked on April 9 as per Section 9 of the Immigration Act, which allows the Immigration director-general to do so.

Momoh was deemed as a prohibited immigrant under the Act, with Low even told to organise flight tickets for his deportation to his country of origin.

Momoh through his lawyers had on Wednesday (April 21) also filed a lawsuit to challenge the Immigration Department’s orders to deport him, with case management for the matter on May 4.

Due to restrictions in a long-term spouse visa, Momoh was allowed to be in the country but was prohibited from employment.

He was a stay-at-home father for his two children while Low is the sole breadwinner. 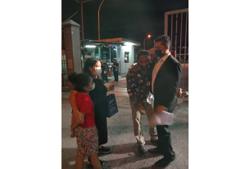