KUALA LUMPUR: Malaysia has deployed the Royal Malaysia Navy (RMN) submarine rescue ship MV Mega Bakti to assist in the search and rescue of Indonesian Navy submarine Kri Nanggala which has been missing since Wednesday (April 21).

Contact with the Type 209 submarine with 53 crew on board was lost in waters off Bali on Wednesday morning.

In a statement, the Malaysian Armed Forces said tDefence Minister Datuk Seri Ismail Sabri Yaakob contacted his Indonesian counterpart Prabowo Subianto to inform him that MV Mega Bakti was deployed at 7am on Thursday (April 22) to join in the operation.

MV Mega Bakti is a RMN charter vessel with a primary capability to perform search and rescue operations for submarines.

The Malaysian Armed Forces added that Ismail Sabri also expressed his sympathy to the Indonesian Navy over the incident.

It added that the Malaysian team is made up of seven RMN officers and personnel, three armed forces medical officers and staff as well as the 44 crew of MV Mega Bakti.

"The operation is being led by Komander Mohd Hairul Fahmy Yob as the Rescue Force Coordinator (CRF), ” said the Armed Forces.

“MV Mega Bakti sailed from the Submarine Command Headquarters operations jetty in Teluk Sepanggar, Kota Kinabalu and is expected to reach the search and rescue location at 3pm on April 25, ” it added in the statement.

It said the Defence Ministry was fully committed to this SAR operation and the availability of RMN proves that any of its assets can be mobilised in all aspects of operations in a short time.

"Apart from emphasising the Defence Diplomacy approach, this SAR operation also demonstrates the RMN's commitment to the international community regarding the duties and responsibilities of submarine operators in the world," added the statement.

This is MV Mega Bakti’s second SAR operation after the search for MH370 which went missing in the Indian Ocean in 2014.

The vessel is equipped with a Distress Submarine Ventilation Depressurrised System including Compressed Air Generation (CAM), Process Control Module (PCM) and a Submarine Link Module (SLM) among others. 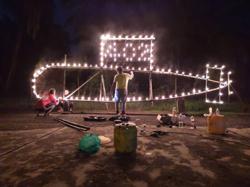