PETALING JAYA: Pakatan Harapan in Terengganu is in the early stages of seat negotiations and the component parties have yet to decide how to divide the 32 state and eight parliamentary seats there among themselves as they prepare for the 15th general election (GE15).

“It’s still early in the negotiations and any information that has gone viral is wrong and confusing.

“The issue of certain parties giving their support to other component parties in the ongoing seat negotiations should also not arise, ” he said in a statement Wednesday (April 21).

He said any decision will be brought up at the next state Pakatan leadership council meeting.

Zulkifli issued the statement in response to a viral message which hinted that state Pakatan leaders were grouped in opposing camps and there were even calls for certain parties to not help shore up support for others in GE15.

The message also said that PKR, a party that is over 20 years old, should be allowed to stand in all 32 of the state assembly seats otherwise it could also join forces with Umno to face-off with rival parties.

In its general assembly in March, Umno declared that it will go into the next general election alone under Barisan Nasional as it officially severed ties with Parti Pribumi Bersatu Malaysia (Bersatu).

However, that decision later came into question after a recording of a conversation allegedly between Anwar and Ahmad Zahid was leaked, suggesting that they had colluded to set the tone of the general assembly.

Both leaders have since denied it was their voices in the leaked audio clip but Perikatan information chief Datuk Seri Azmin Ali was certain that it was Anwar’s voice in the recording.

Pakatan did not win any seats in GE14 but gained the Hulu Terengganu parliamentary seat after its MP Datuk Rosol Wahid, formerly of Umno, joined Bersatu in 2019 but lost it again after Bersatu broke away from Pakatan following the Sheraton Move in 2020. 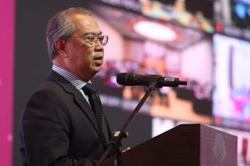