PETALING JAYA: The effectiveness of the Covid-19 vaccines is evident from the fact that none of the nine healthcare workers, who tested positive for the virus more than two weeks after receiving their second dose, exhibited severe or even mild symptoms, says Khairy Jamaluddin.

The coordinating minister for the National Covid-19 Immunisation Programme said that these nine recipients contracting the virus out of 272,019 fully vaccinated healthcare workers worked out to a mere 0.003% infection rate.

“Out of these nine cases, none had severe or mild symptoms, they just tested positive for the virus. This means the vaccine works.

“I think you can say that this is an effective vaccine, ” he told a press conference on Monday (April 19).

During Monday's press conference, Health Minister Datuk Seri Dr Adham Baba also clarified that the nine did not even know they had the virus as they did not show any symptoms.

“They only found out they were positive when they were tested," he said.

Dr Adham noted that the efficacy of the first dose of the Pfizer-BioNTech vaccine was at 65%, increasing to 95% two weeks after the second.

“This shows that the efficacy for the Pfizer-BioNTech vaccine is high and I am convinced that protection can be given to those who have received the vaccine, ” he said.

Covid-19: Close to 10,000 will receive vaccine today under phase two of immunisation plan 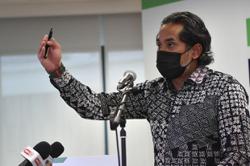