PETALING JAYA: Various parties are gearing up for the launch of the second phase of the National Covid-19 Immunisation Programme on April 19, though much remains to be done to hit the ground running.

Under the second phase, the elderly, chronically ill and people with disabilities are prioritised for vaccination.

People in these groups can check for their vaccination appointment on the MySejahtera app or on the website https://www.vaksincovid.gov.my/

As of March 28, about two million people had signed up under the second phase to receive either the Pfizer or Sinovac vaccine, though the original target was nine million people.

As such, the government said that economic frontliners as well as people in phase three may be bumped up the vaccine queue.

However, while authorities, care facilities and private hospitals are raring to get the second phase kick-started, there will be great challenges as the country rolls out the second phase which is expected to end in August.

Universiti Malaya Department of Social and Preventive Medicine Faculty of Medicine’s Prof Dr Moy Foong Ming said the main challenge would be to ensure those invited to be vaccinated to respond and turn up for their appointment.

“There are a lot of myths being circulated on social media about side effects of the vaccine, and most people, especially the elderly, are keeping a ‘wait and see’ attitude.

“In addition, some elderly may have difficulties accessing vaccination centres. It would be good if there is assistance by NGOs to help provide transport for those in need, ” she said.

Previously, immunisation programme coordinating minister Khairy Jamaluddin revealed that more than half of over 30,000 vaccination appointment invites that were sent out did not get a response.

Prof Dr Moy said it was vital for the current communication strategy employed by the authorities to be improved in order to ramp up the vaccine registration rate.

“The registration process must be ongoing and in parallel with the vaccine rollout to help boost confidence, especially for those who have seen others go through the vaccination process safely.

“Members of parliament, state assembly members, NGOs and community leaders should actively promote the benefits of the vaccine, ” she said, adding that this must include on-ground outreach programmes in rural areas.

Malaysian Society of Allergy and Immunology president Prof Dr Baharudin Abdullah said while it was understandable that there were fears surrounding the vaccines, high-risk groups would be even more vulnerable if they did not take their Covid-19 jabs.

“According to the US Centers for Disease Control and Prevention, those having chronic medical conditions are at risk of contracting severe Covid-19 infection which could be fatal.

“Those who have these conditions tend to be in the older age group. Thus, we can see that this group requires more protection than others as severe infection and fatalities are often reported among them, ” he said.

He added that there was no known evidence to show that the chronically ill were susceptible to greater adverse effects from vaccination than healthy individuals.

“It is, however, acknowledged that the immune system of a patient with an immunocompromised condition may not respond to the vaccine as strongly. But a partial response is still better than no response at all, ” he said.

Prof Dr Baharudin said the government had gone all out to convince people to get their jabs, adding that a possible option to hit the vaccination target was to make it compulsory.

“The other issue is to tackle fake news. It should be promptly refuted before distrust is planted among the people, ” he said.

In the meantime, about 60 private hospitals have signed up to administer the Covid-19 vaccines, revealed the Association of Private Hospitals Malaysia president Datuk Dr Kuljit Singh.

“The majority of hospitals in the Klang Valley and the bigger hospitals have gotten themselves registered on the ProtectHealth website, ” he said.

He said, however, that registrations were still relatively slow among private hospitals in the states outside the Klang Valley.

He expressed hope that the government could consider assisting private hospitals in procuring their own vaccines. 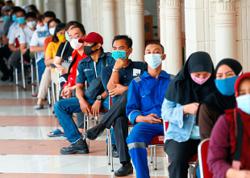