MELAKA: The Melaka government will ensure a factory technician gets all the help he needs after a devastating fire razed his family's ancestral home in Kampung Durian Daun, Masjid Tanah, here early Thursday (April 15) morning.

Melaka Chief Minister Datuk Seri Sulaiman Md Ali, who visited 42-year-old Sulaiman Kaus at the site, said he will also ask the Melaka Housing Board to reconstruct a three-bedroom house for the family.

"Sadly, the tragedy has left the family with nothing," he said after visiting the site together with Melaka Legislative Assembly Speaker Datuk Seri Ab Rauf Yusoh and other state officials.

Sulaiman said he has also instructed the Alor Gajah Municipal Council (MPAG), state Welfare Department and other relevant agencies to expedite assistance to the family.

In the 3am blaze, Sulaiman Kaus sustained minor burns after he attempted to save his mother-in-law Norisah Tahir, 79; wife Siti Faismah Basir, 42; and three children aged between four and six years old.

The family also lost all their belongings as well as clothing that had been bought to celebrate Hari Raya next month.

However, Sulaiman Kaus managed to retrieve his family's documents through his quick actions.

Meanwhile, Melaka Fire and Rescue Department public relations officer Soon We Kiang said firemen from the Alor Gajah station faced inconvenience in dousing the fire due to the unavailability of a nearby hydrant.

"The nearest hydrant was situated quite a distance from the burning house," he added. 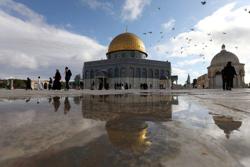