PETALING JAYA: Quick action by the Selangor Water Management Authority (Luas) at Sungai Batang Benar has prevented the Sungai Semenyih water treatment plant from shutting down due to pollution.

He said the incident was discovered only after the fire was put out at the factory.

“Luas then activated a Code Yellow status based on the Emergency Water Source Contamination Manual to detect the areas which could potentially compromise the Sungai Semenyih Water treatment plant.

The Negri Sembilan Water Regulatory Authority was also on the scene with Luas.

Ten bags of activated carbon were placed in Sungai Batang Benar to prevent odour pollution within the water source.

At 8am on Tuesday, readings taken from samples at Jambatan Sungai Pajam recorded zero TON and water flow was normal. 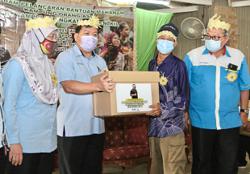