He said the northern alignment – dubbed the ECRL 3.0 alignment – will cost an estimated RM50bil.

This is lower than ECRL 2.0, which Dr Wee said would have cost RM52.28bil inclusive of the Serendah Bypass project, and the ECRL 1.0 which was estimated to be RM55bil.

“Although ECRL 3.0 reverts to the original alignment approved in 2017 under the Barisan Nasional government, it will still involve a lower estimated cost at RM50bil.

“The cost estimate is also lower than the cost for ECRL 2.0 which passes through the southern alignment, ” Dr Wee told a press conference at his ministry here yesterday. In addition to the lower construction cost, ECRL 3.0’s potential cargo and passenger load is significantly more than what the project could have earned if it continued with the southern alignment.

“Rail industry research had forecast that the ECRL may transport some 26.12 million tonnes of freight in its first year of operation via the northern alignment.

“This is far higher than the 9.0 million tonnes of freight forecast for the southern alignment.

The ECRL 3.0 alignment will run from Mentakab to Port Klang via Bentong, Gombak and Serendah.

The southern alignment proposed by the previous Pakatan Harapan government would have gone through Negri Sembilan instead.

Dr Wee said the Cabinet gave its green light for the ECRL project to revert to the original alignment on Sept 2 last year.

With the changes, the ECRL 3.0 alignment, which stretches from Kota Baru to Port Klang, will now span a total of 665km.

The inclusion of the Serendah Bypass project in ECRL 3.0, he added, will solve rail cargo congestion as it avoids going through Kuala Lumpur city centre.

“Freight trains will be carrying chemicals and cement. With the Serendah Bypass, these types of cargo will not have to go through KL Sentral, for example, ” he said, adding that the Pakatan government also had plans to build the Serendah Bypass.

On its environmental impact, Dr Wee said the ECRL 3.0 will not run through either the Unesco heritage site Gombak Quartz Ridge nor the Batu Dam.

Land acquisition will also be less, with the northern alignment expected to involve 4,302 lots compared with the southern route which would have affected 6,038 lots.

“Only two Orang Asli areas in Pahang may be directly affected under ECRL 3.0, compared to seven under the ECRL 2.0.

The minister said the construction of the ECRL can be completed by 2027, with the progress currently at an “encouraging” 21.39%. 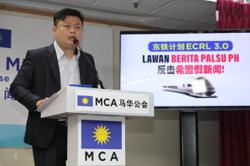