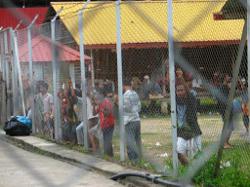 PUTRAJAYA: A Covid-19 outbreak has been discovered among inmates of a transit detention centre in Johor, says the Health Ministry.

“The cases under this cluster were uncovered from a targeted screening exercise conducted on inmates at a transit detention centre in Padang Hijau, Kluang.

“So far, there are 12 confirmed cases from 17 individuals who were tested, ” said Dr Noor Hisham in his daily Covid-19 statement.

The cluster is among 10 new ones recorded in the country on Tuesday.

Another new cluster is linked to a religious event in Kampung Bukit Belacon in Lahad Datu, Sabah.

“The Belacon cluster was discovered after one individual developed symptoms and tested positive on April 5.

Five of the other new clusters are linked to workplaces, while another three are classified as community outbreaks. Johor cops arrest 20 over viral rioting incident in Batu Pahat
Don't leave aside those with HIV during pandemic, govt urged
Dr Wee remembers veteran journalist Wong Sai Wan as a mentor to many journalists
Pasir Gudang MP calls for another round of bank moratorium to help groups hit by MCO 3.0
Curfew in eastern Sabah waters extended to May 30
Covid-19: Over 200 ordered to return after attempting to cross district borders on first day of Raya
Covid-19: 18 fined for SOP violations in Penang
Cops on the hunt for two immigration detainees in Menggatal who fled detention centre
Father arrested for allegedly hitting wife, daughter with plastic chair
Former national shuttler Chong Wei shares touching story during Raya