He was a treasure trove of knowledge on global affairs and would share his information readily, whenever appropriate.

Malaysia’s high profile in international affairs back then under Tun Dr Mahathir Mohamad’s first tenure as prime minister had kept Wisma Putra on its toes.

And Ahmad Kamil knew when to feed the media, which was always hungry for news.

When he entered any room or hall, you couldn’t help but notice the towering figure – he was over 180cm (six feet) tall.

It didn’t matter if you were a senior reporter or a greenhorn, he would entertain any questions, relevant or not. He would make sure you learned about the latest in foreign affairs and would take the time to explain the nuances.

Several of his former colleagues and juniors working with him when he was Wisma Putra’s secretary-general described him as suave and intelligent.

Datuk Hsu King Bee only met Ahmad Kamil as a junior officer in the ministry in the late 1970s.

“I joined Wisma Putra in 1972 but only met him years later when he came back from an overseas posting to serve as the undersecretary for South-East Asia.

“When he was eventually promoted to secretary-general years later, I was in the policy planning department and together with Tan Sri Abdul Kadir Mohamad, who was director-general, we worked closely with him, ” she said.

“He knew his issues well. He did more than (just cover) Asean. He did the whole spectrum of foreign affairs issues.

“But as the boss, he was also fair and caring. He allowed juniors like me to develop our potential. He shared information with us and gave us that opportunity, and to operate at the regional level as well, ” she added.

Hsu said some of the retired diplomats keep in touch with each other and they visited Ahmad Kamil a few months ago.

“He has not been well for quite some time, we visited him well before the movement control order.

“His passing is a personal loss for us. He is a national treasure for his contributions to the country, ” she said when contacted.

In his book Growing Up with the Nation, he credited Dr Mahathir and Tun Abdullah Ahmad Badawi, who was foreign minister at one time before eventually taking over the premiership from the former, with making it easier to make decisions on foreign issues.

“I found it was easier to handle my job with Dr Mahathir as prime minister because decisions were taken on a personalised basis.

“Wisma Putra became, to all intents and purposes, an extension of the Prime Minister’s Office.

“I moved quite freely whenever there was a need for me to consult with the prime minister. The personality of the Foreign Minister (then) Datuk Seri Abdullah Ahmad Badawi, facilitated this. He gave me a free hand to run the ministry, ” he wrote.

Another Wisma Putra veteran, Tan Sri Hasmy Agam, called Ahmad Kamil one of the “ultimate diplomats of the older generation”.

“He was articulate, well-spoken and suave – he had all the diplomat’s attributes although he might not have been flamboyant.

“We kept in touch over the years and the camaraderie was – and still is – great among the older generation, ” Hasmy added.

In his memoirs published in 2013, Ahmad Kamil wrote about his experience and involvement with Somalia, Sudan, Bosnia-Herzegovina and Kosovo where Malaysia stood up for the rights of and natural justice for the people in these countries torn apart by internal conflicts and bullied by powerful forces.

He recalled that Malaysia, right from the outset, had bucked the trend and stood on principle to avoid being labelled as staunchly allied to either side in the Cold War.

“It was to the credit of Tun Abdul Razak who was responsible for the shift in our policy. Non-alignment and neutrality became important cornerstones of foreign policy.

“These hallmarks of Malaysian foreign policy were to reach full realisation under Dr Mahathir and the sea change that was to take place in world affairs as the Cold War came to an abrupt end, ” he wrote.Ahmad Kamil ended his illustrious career in the diplomatic service in 1996. He passed away yesterday at the age of 83.

The kampung boy from Kulim, Kedah, who was always more interested in football and rugby than politics, eventually found a career in foreign service and made valuable contributions to the nation.

He will always be remembered as a towering figure, in more ways than one. 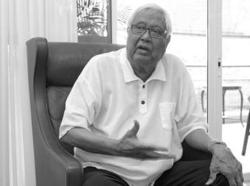