Liow, who has been linked to Macau scam syndicate operations here, was believed to have also been paying a former deputy public prosecutor who acted as a fixer for the syndicate.

Abdul Hamid told reporters that Liow was on the run after allegedly receiving a tipoff from someone on his payroll.

"We suspect there was an information leak by someone within the police force.

"This is a betrayal by our personnel, and we will not hesitate to take stern action.

"Disciplinary action aside, we will first take action against them according to all available laws," he told reporters at Bukit Aman on Tuesday (March 30).

He said aside from an assortment of currencies worth RM773,145.78, police also seized 16 vehicles including a Rolls Royce and Bentley worth RM6.67mil.

Abdul Hamid said their investigations revealed that 34 law enforcement personnel including police personnel were aiding, mingling and receiving payment from the syndicate.

"One of those arrested during the raids was a former deputy public prosecutor.

"We believe this individual was involved due to his network of connections with law enforcement agencies," he said.

Abdul Hamid said they have frozen 41 bank accounts worth RM4.05mil and seized RM8.86mil worth of vehicles belonging to 21 individuals and 16 entities, including the Yayasan Winner Emperor Sedunia and Pertubuhan Integrity Nicky Liow Malaysia under Section 44(1) of the Anti-Money Laundering, Anti-Terrorism Financing and Proceeds of Unlawful Activities Act 2001. 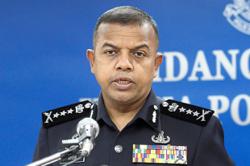