ISKANDAR PUTERI: The Malaysian Quarantine and Inspection Services Department (Maqis) has confiscated over 40 tonnes of imported cocoa fruit and vegetables worth more than RM270,000 at Port of Tanjung Pelepas here.

State Maqis director Nur Afifah A. Rahman said the cocoa was seized after an inspection found that the fruit was infested with maggots.

The vegetables had raised suspicion as the importer’s address was different from the address stated in the permit.

The cocoa, she said, was from Uganda and inspected at about 10am on Tuesday.

“Inspection inside the container found 24,210kg of cocoa fruit worth RM227,213 that was infested with pests, ” she said.

She added that the vegetables were from China and inspected at the same location on the same day at about 11am.

“However, the address on the permit and the manifest differed from one another, prompting confiscation for further investigation.”

Nur Afifah said the cocoa case was being investigated under Section 14 of the Malaysian Quarantine and Inspection Services Act 2011 (Act 728) for importing agricultural goods that were contaminated or damaged.

The offence carries a maximum fine of RM100,000 or six years’ jail or both, and a fine up to RM150,000 or imprisonment up to seven years for a repeated offence, upon conviction.

The vegetable case is being probed under Section 13 of the same Act for making a misleading declaration to the authority. 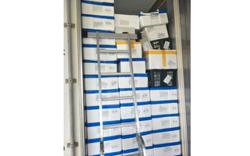